“Genocide” of the Law 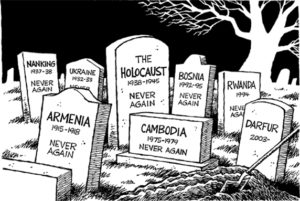 One of the trends in the international political and information environment remains the accusations of representatives of various states and ethnic groups of genocide. The convenient capacity of the word played a cruel joke with it, and with all of us, as well as with the infamous “quintessence”, “marginals” or “nonsense”, which the general public often uses for other purposes. With “genocide”, however, everything is much worse. The incorrect use of the word “quintessence”, in essence, does not threaten anyone. But the word “genocide” introduced into the terminology in the 30s of the last century by Polish lawyer Raphael Lemkin, has international legal status since 1948 as an officially recognized legal definition. According to the “Convention on the Prevention and Punishment of the Crime of Genocide” the UN member states confirm that “genocide, regardless of whether it is committed in peacetime or wartime, is a crime that violates international law” and implies “… acts committed with the intent to destroy, in whole or in part, any national, ethnic, racial or religious group as such.”

And here you should stop to draw a clear divide.

So, the above-mentioned Convention entered into force on January 12, 1951, when it was ratified by the parliaments of 20 countries. According to paragraph 2 of Article 11 of the Universal Declaration of Human Rights of December 10, 1948, “no one shall be convicted of a crime on the basis of an act or for inaction that, during their commission, did not constitute a prejudice under national laws or international law”. That is, even in legal theory, international legal institutions cannot characterize mass killings and harassment of civilians as genocide if it happened before January 12, 1951. In practice, as usual, everything is much more complicated. Firstly, the overwhelming number of countries, including such an economic and military-political dominant as the United States, adhere to the primacy of national legislation over international one. And the national judicial system should build on the timing of ratification of the Convention by the national parliament. The USSR, for example, ratified it in 1954, the United Kingdom – in 1970, China – in 1983, and the United States did it only in 1988.

Secondly, few of our contemporaries who like to generously stick labels with the word “genocide” on the political map of the world know that according to the Convention, only specific individuals can be blamed for genocide, but not states or ethnic groups. Moreover, it is still fundamentally important whether the person had a special intention to commit the specified crime, i.e. to destroy one or another group of the population, because in the absence of a conscious intention, it cannot be brought to justice for genocide. Any lawyer who has faced law enforcement practice knows how difficult it is to prove in an impartial court the existence of such an intention.

It should also be noted that a clear, well-established legal procedure for the recognition of the genocide by the UN does not exist today. Therefore, if the media publish materials that “the UN recognized the events of genocide (hereinafter referred to as the date and region)”, then in 99.9% we will talk about journalistic manipulation of facts. From time to time, some organ of the UN large bureaucratic machine inserts this term-stamp in its documents, which has absolutely no legal consequences, but makes it possible for active speculation in the media.

At this point, the reader is probably about to ask the question: “If genocide, as a legal concept, appeared so late, then what were the Nazis tried in Nuremberg for?” And it will be a very good, correct and difficult question. The defendants were presented with a huge list of charges, including “war crimes”, “crimes against peace”, “crimes against humanity”, etc. And here again we are faced with, to put it mildly, the ambiguity of this event, which became a milestone in history and largely determined the development of international law. To begin with, the fundamental requirement of the trial, which is the independence and impartiality of the court, was ignored. In Nuremberg, the victors judged the vanquished. At the same time, another legal principle was violated, according to which no one can be punished for misconduct not prohibited by law. And “crimes against humanity” as a legal definition at the time when the Tribunal got started was an outright “novelty” in the architecture of international law. It would seem that with “war crimes” everything was simple and clear. Not at all. It is enough to recall the barbaric destruction of the militaryless Dresden, Hiroshima and Nagasaki in order to understand that the “aimless destruction of cities and towns…” incriminated (and rightly!) with the Nazis should have be applied to the Anglo-Saxon allies, but… A winner is always right.

So, as we see, the formation of the system of international law took place, and continues to happen with great difficulties. However, only the one who strives can make it. The improper use of the definition of “genocide”, which has a very specific content, especially the retroactive use of it “from the old days to the present moment”, does not strengthen this system, but undermines it, provokes legal nihilism, replacing the legal approach with an emotional thirst for revenge. This path leads humanity to a well-known impasse.