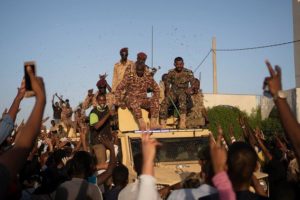 The Guardian points at the background appeared for gradual stabilization of the situation in Sudan after military coup d’état. According to Al Monitor, retirement of the Minister of Defense Auf who first headed the transitional Military Council (MC), and al-Burhan’s appointment by the head of that executive body were important moves in that direction. According to expert of the Brookings Institution Vertin, the opposition that declared to keep on protesting feels better about al-Burhan. “Al-Burhan is considered to be a contractual person that has already showed his readiness to go to concessions for the protesters”. “The talks between the MC and oppositional leaders being held at the moment might be profitable”, Al-Jazeera uses the words of analyst of the Africa Center for Strategic Studies Sigle. The participants of the consultations see they are unable to rule the country themselves, that is why formation of joint civil and military government is optimal on the first stage, Reuters points out. The Generals cannot put a blind eye on the protesters’ calls (who represent different social clusters) on Egyptian scenario inadmissibility as well as the position of the outer players, Khaleej Times comments. Sudan suffering from serious economic troubles needs foreign financial help, that is why the authorities are going to try to show the West and the USA they are ready to fulfill the demand to hand over the control over the country as fast as possible, the Irish Times believes.

From the point of view of researcher of the Royal United Services Institute Keller, the development of the political situation in Sudan depends a lot on Saudi Arabia and the United Arab Emirates – the main partners and supporters of the republic. Riyadh and Abu Dhabi are going to protect their interest, that is why they will demand Khartoum to fulfill the obligations taken before that for instance refer to further participation in anti-Iranian initiatives and support of the military campaign in Yemen, AFP states. According to professor Krieg from King’s College London, Arabian monarchs are ready to completely support al-Burhan with whom they have previously established close ties as a leader of the Yemeni campaign from the Sudanese leadership. “Riyadh and Abu Dhabi are not keen on further destabilization of the situation in Sudan, so they will do their best to organize a manageable transition to the loyal civil administration”, France 24 comes up with opinion of International Crisis Group expert Dickinson. At the same time, Saudi Arabia and the United Arab Emirates intend to act as lawyers for Khartoum in a dialogue with the United States, which has so far taken a wait-and-see attitude suspending the recently launched process of excluding Sudan from the list of sponsors of terrorism, Al Monitor points out.

The Washington Post expresses concern with interference of other outer players into the political processes taking place in Sudan. First of all it refers to Iran which might try to recover its positions in the republic lost during the last years, and to Qatar which is capable to support local Islamic gangs, the Daily Telegraph reports. Taking into account a long history of ethnical and territorial conflicts in Sudan, all this threatens that the republic might turn into a hotbed of constant tension, a researcher of Tufts University de Vaal warns.