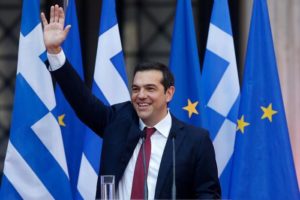 Reuters draws attention to strengthening of the left tendency in the economic policy of the Greek government. Previously, Prime Minister Tsipras initiated increase of state expenses for the social needs, and now he declared realization of new transformations package aiming to increase standards of living, Spiegel reports. According to Kathimerini, the main task of the Cabinet leader is to recover political positions of the ruling Coalition of the Radical Left (SYRIZA). It progressively lags oppositional the New Democracy party (ND) leading in electoral ratings, and risks to lose the elections both to the European Parliament and local power structures scheduled for May, the Greek Reporter comments. It is important for Tsipras to evade such developments because a failure before the Fall parliamentary campaign would demoralize SYRIZA, Radio France Internationale informs. The Prime Minister’s decisiveness is caused by the lack of reaction from the EU leadership to the adjustment of social and economic policy by the Greek government, the Financial Times believes, “If previously the European commission has negatively assessed any attempts to scale back the harsh austerity measures, now it is ready to put a blind eye on it”. The eurocrats do concern with populist initiatives of Athens though they understand that a possible rise to power of opposition would make foggy the chance that Greece fulfills its economic obligations, Sole 24 Ore points out.

According to the National Gerald, another top-priority task of Tsipras is to find potential partners to enter the ruling coalition. The SYRIZA leader tends to be in advance of the ND which very possibly will not get the majority of the votes necessary to form the government and will be obliged to ask other parties for support, the Wall Street Journal comments. Special hopes are set by the Cabinet leader on the interaction with a social democratic Movement for Change, the International Business Times believes. A while back Tsipras included some of its representatives into the Cabinet and expects that cooperation will go on in the period after elections, the Greek City Times notes.

According to observers, Tsipras holding a course for consolidation of the Left, is going to activate contacts with small parties. First of all, it refers to the party Day 25, which was recently established by former Minister of Finance Varoufakis, Kathimerini reports. Being a charismatic politician who stands for transformation of Greece into “a general welfare state” Varoufakis is capable to win over a certain part of votes, the National Gerald believes calling the Day 25 a “dark horse” of the upcoming parliamentary elections. Varoufakis was once among close associates of Tsipras within SYRIZA but he left the party because controversies appeared. Now the Prime Minister has a chance to mix well with the ex-leader of the Ministry of Finance again. Such a move will fortify his positions, the Balkan Insight points out.