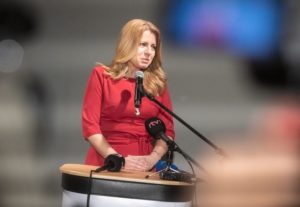 According to the New York Times and the Slovak Spectator, the victory of independent candidate Čaputová in the presidential elections will be a big trouble for the Pellegrini’s government. She became a more serious opponent for the Prime Minister than Kiska who in these recent times harshly criticized the Cabinet and who leaving the presidential office, the Financial Times states. Čaputová who declared abuse of power and democracy development to be her priorities during the pre-electional campaign, obviously, is not going to be limited to rhetoric, Deutsche Welle broadcasts. The elected President is going to use her constitutional rights to contribute providing a large-scaled anti-corruption campaign and counteract the Prime Minister’s efforts to suppress dissension, the BBC uses the words of Bratislavan political expert Khaulik. The new President’s plans to put veto on the anti-popular legislative initiatives of the ruling coalition show that Čaputová is ready for a struggle against the government, the Wall Street Journal believes.

According to the Guardian, Čaputová can seriously handicap the preparation of the loyal to the Prime Minister Direction – Social Democracy (DSD) party for the parliamentary race set on March 2020. The elected President is going to actively promote the interests of the Progressive Slovakia party (PS), which has not been represented in the legislative body yet and which leadership she was a part of, the International French Radio notes. The support of Čaputová will contribute the popularity growth of the PS, the World Politics Review comments: “That will increase the progressists’ chance and make them attractive partners for the parliamentary opposition”. The leadership of the Freedom and Solidarity party, which is one of the most influential DSD opponents, has already signaled it is ready to start finding common ground with the PS, La Vanguardia reports. Establishment of cooperation between them can fasten disintegration of the governmental alliance, Dennik N notes. Recently the relations between them have escalated enough already because of the controversies on the foreign policy issues, the Foreign policy comments.

The main Čaputová’s foreign priority is further development of the European direction, Tagesschau informs: “The elected President of Slovakia is going to secure for Bratislava a status of a confident and predictable partner of Brussels”. Observers highly appreciate the perspectives to make the dialogue deeper, because it is what the EU leadership is keen on. The euro bureaucrats hope Čaputová not only will become one of the liberal leaders in the Central and Eastern Europe, but also will be able to challenge the right populists dominating there in these recent times, Reuters points out.