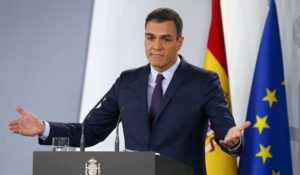 Oppositional the People’s Party (PP) has lost the chance to get back own from the socialists in the upcoming parliamentary elections on April 28 this year, the Independent states. If recently the PP was considered favorite of the race, now its rating has dropped to 20 percent – the lowest index of the last years, el País notices. Spanish political expert Lopes believes that is an outcome of an ineffective election campaign. “Bringing focus on support of the business, Casado did not pay enough attention to social issues most people are interested in”. Bloomberg predicts further weakening of the PP positions because of the fight against the legacy of former Prime Minister Rajoy launched by Casado. The decision to put new leaders on the top of the electoral lists provoked escalation of contradictions with the ‘old guard’, el Nacional points up. Besides deepening of the problems within the party, Casado faces serious troubles in forming pre-election coalition, El Diario reports. Leader of the Citizens party Rivera cranks up pressure on the PP accusing them of the use of the right-wing populist rhetoric which does not match to centrist values, Agencia EFE comments. If even Casado is successful to establish a dialog with Rivera, that does not guarantee that the PP will come back to power because even after the alliance is crated these parties will scarcely be able to get the majority of the seats in the Parliament, the Financial Times notices.

According to the BBC, troubles of the PP encouraged the Spanish Socialist Wokers’ Party (the PSOE) leading after the polls: “The PSOE Chairman Sanches who is acting Prime Minister is going to get all the left people’s votes”. He is cranking up criticism towards the ideologically close Podemos party for that purpose, el Confidencial notes. Not coincidentally Sanches called Podemos the main culprit of the previous government failure to cancel Rajoy’s labor reform annoying lots of the Spanish, ABC informs. At the same time, engaging competition with other left parties not only the PSOE weakens their positions, but also reduces the chance to form a governmental coalition with them after the elections, the Politico believes.

Observers agree that in the end of race none of the participants will get the parliamentary majority. The only way out of the situation is to form a coalition of left centrist and right centrist parties, Bloomberg notes. The PSOE leader is getting ready for such a scenario. He makes steps to create favorable context for a dialogue with the leaders of the right center, first of all with the Citizens, el Razón reports. In this regard la Política draws attention to tightening rhetoric of Sanches on the Catalan issue. Taking into account the PSOE leader’s signals he is ready to find points of contact, much will depend on the right centrists’ position, el Mundo notes. If they do not show a political will and do not establish cooperation with the PSOE, Spanish process to go out from the political turbulence zone will last for an unidentified term, Deutsche Bank experts point out.