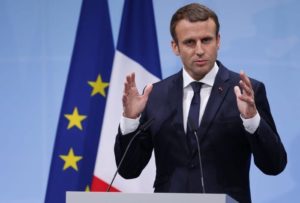 France launched diplomatic offensive in Africa, foreign media are stating. AFP points out Paris is going to move beyond the traditional framework of influence, which consists of French speaking countries in the West of the continent, and to strengthen positions in the East. Deutsche Welle considers illustrative the fact that President Macron’s first visit during the recent African tour was to Djibouti. French leader tended to actualize strategic relations with the country that showed strained relationship during the last years, Opinion says. “Djibouti may become a gate for further infiltration to the region, – the Voice of America uses the words of a Chatham House expert Paul Melly. – Macron makes no secret this is the goal of French leadership”. There is every reason to believe that Djibouti will become a key partner of Paris in Eastern Africa, Le Point notes. Authorities of Djibouti are afraid that Washington being annoyed of the human rights situation will decrease the support of the republic. That is why they are keen on expansion of contacts on the international scene and consider France as their natural ally, speaks Radio France Internationale.

France will promote a new approach supposing “respectful partnership” with African states to realize its plans, Le Mond notes. In such a way Paris wants to put itself up against Beijing, which activity on the continent, according to the French authorities, is solely predicted by self-interest, the Economist comments. According to expert of the Global Dialogue Institute in Cape Town Naidu, Macron made it clear that he considers China to be the main competitor in Africa, and he is going to actively counteract the expansion of Chinese influence. According to South China Morning Post, the French President has already tested renewed political principles during his visits to Ethiopia and Kenya. Barring economic agreements, Macron put a special stress on the issues on the environment and cultural legacy defense, Figaro notes. Strengthening of the interaction with such big African countries as Ethiopia and Kenya is extremely important for France supposing to use them to increase its influence on political and economic processes in the region, Le Point believes.

According to France 24, Paris will keep on cranking up its activity because it is keen on achieving fast results. Macron facing the social tension growth has to show the French his efforts in foreign policy are profitable, le Parisien comments. AFP believes the activity of the French President has a political background as well. Paris is going to play the first role in definition of the EU African policy, Le Nouvel Observateur points up. According to the Economist, Macron is motivated by an intention to pacify Italian leaders who recently criticized Paris for carrying out a neocolonial policy in Africa and pretending to have a key partner status of African countries.