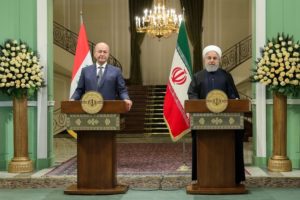 Foreign media tend to notice certain rapprochement between Iran and Iraq. Tehran is making an additional impulse to cooperation with Baghdad considering activation of regional connections as a response to tightening American sanctions, Al-Monitor comments. The CNBC says the leadership of Iran bets on closer trade and economic partnership. That theme was discussed during recent talks of the two presidents, the AP notes. According to Financial Review, both Tehran and Baghdad are studying a possibility of the transfer to settlements in national currencies, as well as creation of a free trade zone in border areas. In order to encourage Iraq to increase interaction, Iran advocates an increase in bilateral trade and demonstrates its willingness to make various concessions and provide investment for infrastructure development, says Press TV. Tehran, in particular, intends to force the implementation of the railway construction project between the Iranian port of Shalamcheh and the Iraqi city of Basra, Middle East Monitor writes.

Baghdad, for its part, makes it clear that it is not going to be led by Washington, which is in favor of isolating the Islamic Republic, and neglecting the dialogue with Tehran, Deutsche Welle reports. There is indicative criticism by the Iraqi authorities of the American sanctions policy, which touched the extractive industry of Iran, the Jerusalem Post emphasizes. According to Reuters, Iraq will demand from the United States to give it the opportunity to continue purchasing Iranian gas: “The White House had previously given Baghdad 45 days to search for alternative sources of hydrocarbon supplies, but Iraqis consider this condition to be insufficient.” From the point of view of Middle East, this position of the Iraqi leadership indicates that the recent election of a new president and prime minister of the country did not lead to a change in the nature of Iran-Iraq relations. If earlier there were hopes that Baghdad would begin a gradual drift away from Tehran, now it is obvious that these expectations are not met, the Washington Post comments. Indirectly, according to Al-Monitor, this is also evidenced by the decision of the head of the Iraqi government, Mahdi, to supply the monetary allowance to the fighters loyal to Iran of the Shiite militias belonging to the Popular Militia Force (PMF), who actively participated in the rout of the Islamic State militants. Washington opposed such a move legalizing the PMF as an element of the Iraqi security system, but Baghdad ignored the demand of the American administration, Iraqi political analyst Zeed comments.

The USA will not disregard the emerging rapprochement between Iran and Iraq, Reuters notes, predicting increased pressure on Baghdad from the White House. “The United States certainly has a lot of leverage over the Iraqi leadership, but it’s not worth exaggerating their possibilities, which leaves room for Iraq to maneuver,” Jerusalem Post quoted Professor Nearat at Kufinsky University.