Relationship between the EU and Switzerland. Media Review 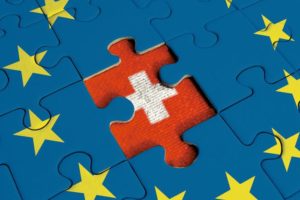 Reuters News Service states that actions of Switzerland that happens to be one of historical good-faith partners of Brussels run counter to the EU policies with increasing frequency. AFP News Agency maintains that the Swiss Confederation’s stance on migration policy is quite illustrative. The country’s leadership, which had formerly provided verbal support to the UN Global Compact, in the end ignored the Migration Conference in Marrakesh, commented EUobserver. In fact, Switzerland turned out to be on par with such countries as Hungary and Italy that were acknowledged to be a coherent critic of Brussels, The New Europe emphasizes. Swissinfo.ch believes that a change in the Swiss authorities’ attitude to the theme of migration is a consequence of the increasing influence of the right-wing populist and center-right forces in the Federal Council – the supreme executive organ of State authority. As reported by Radio France Internationale, after recent redeployment of staff within the Federal Council some key posts were occupied by members of the Swiss People’s Party (SPP). We are, first of all, talking about the presidential post which is to be taken in January 2019 by Swiss Finance Minister Ueli Maurer who has nationalistic and Euro-skeptic views, The International Business Times marks.

According to The Financial Times, strengthening of the voice of right forces in the higher authorities is fraught with serious difficulties when Bern and Brussels are negotiating a comprehensive treaty on cooperation (Switzerland’s ‘institutional framework’ agreement with the EU), which is intended to replace all existing agreements. La Liberte believes that the Swiss Confederation’s decision to suspend its negotiations with the EU up to the moment when wide public discussions are held arises from the impact of the Swiss People’s Party. The result of deliberations on this topic can be very disappointing for Brussels, Swissinfo.ch marks, forecasting an increase in the number of opponents to conclude the treaty with the EU under terms and conditions set by Euro-bureaucrats. Not only right-wing populists, but also some representatives of center-left forces protest against making concessions to Brussels as the former fear the decline of national sovereignty while the latter see the economic component of the document as a threat to national interests, The Tribune de Geneve writes. In the view of a number of observers, Social Democrats and their allies will make criticism of Switzerland’s ‘framework’ agreement with the EU to strengthen their electoral positions prior to the parliamentary elections scheduled for October 2019.

Brussels found itself in a bad situation, EUobserver noted. To defuse tensions in relations with Bern, the euro officials, who had previously indicated the intention to use painful financial sanctions against the Swiss Confederation, changed their position on the subject. That is how The Epoch Times comments on the additional time granted to Switzerland for settlement of all matters related to its ‘framework’ agreement with the EU. However, BBC believes that the EU leadership’s efforts are short-sighted. Its actions are only contributing to strengthening positions of both Swiss right-wing populists and skeptics inside the EU; those, who will build up pressure on Brussels, seeing concessions to Bern as excessive leniency, emphasizes Sky News.