Morales Is Risking To Sink in the Political Storm Forming in Bolivia. Media review 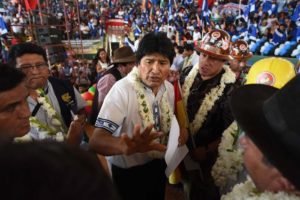 President of Bolivia Morales is ready to run as a candidate in the 2019 elections, Vanguardia says, noting that the Bolivian leader has made the first step in this direction by changing the head of the Supreme Electoral Court (the SEC) of Bolivia. This is the body that in the nearest future has to make a decision about legitimacy of the Morales’s attempts to ignore the results of the referendum held in 2016 when the people voted against his fourth presidency, Diario comments. The President himself has no doubts that he will be approved by the SEC, the International French Radio says, considering the evidence of this as a large-scale propaganda campaign started by Morales. Pais points out both the President’s trips over the country, which have become more frequent, and his meetings with the people. During the meetings he points up the achievements of the government in the social and political sphere as well as the authorities’ plans to make the living standards better.

The upcoming elections won’t be an easy ride for the head of the state, Razon notes, considering the opposition potential to be very strong. Bolivian web-paper Red 21 says that formation of a large coalition by one of Morales’s most influent rivals, the former head of the state Mesa, is an alarm for the current head of state. The ex-President who is cranking up his popularity by criticizing the mistakes in the domestic policy made by the head of the state and who is ready to find compromise with the rest of Morales’s opponents is capable to start the ball rolling parties and movements discontent with the President, France 24 supposes. The consolidation of the opposition will be supported by a very painful for many people recent rejection of the International Court of Justice to fulfill the Bolivian demand to Chile about the repatriation of the littoral territories to the republic lost after the war in late XIX century, Global Risk Insights points up. Considering this decision to be both a proof of Morales’s inability to firmly defend the national interest and the failure of one of his main projects, the opposition shows its readiness to speed up the creation of the united anti-governmental movement, Opinione comments.

From the perspective of Espectador, the president more likely will press harder his rivals. “The Morales’s restrictions of the independent media in the republic prove he is preparing for a crack-down on his opponents”. However, as it is supposed by Miami Gerald, while tightening the screws, the Bolivian leader is making a serious mistake that may lead him to some negative outcomes in the domestic policy. As the experience of Nicaragua shows, with his actions, the President is just provoking radicalization of opposition, which may change over to the street actions, AFP notes. Morales is risking to face some large-scale anti-governmental manifestations in the nearest future, Global Risk Insights believes. Escalation of the political situation within the country will be a true gift for the United States that will likely support Morales’s opponents, Stratfor points out, “Washington is doing its best to speed up the collapse of the unwelcome left regime in Latin America”.