US strategy in Transcaucasia. Media review 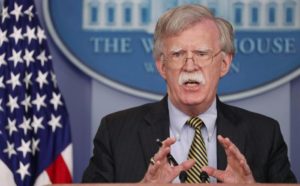 The recent tour made by the US National Security Advisor J. Bolton in Transcaucasian republics revealed a growing interest of the US Administration in this region, The Washington Times marks. Stratfor attributes the increase in activity of the White House to its growing confrontation with Iran. ‘Washington wants to put Transcaucasian countries at odds with Teheran in order to improve efficiency of Washington’s policy of isolating this Islamic Republic, EurasiaNet cites Paul Stronski, Senior Fellow at the Carnegie Endowment for International Peace. ‘It is no mere chance that the focus of recent talks between J. Bolton and heads of Azerbaijan, Armenia and Georgia has been on Iran’s issues’. But Washington’s efforts have not yet succeeded, EVRactiv marks. In the words of Z. Shiriyev, Fellow at the International Crisis Group, Yerevan and Tbilisi are avoiding Washington’s invitations to join the anti-Iranian alliance as they do not want to strain relations with Teheran. Nevertheless, commentators believe that the USA will keep pressure on Transcaucasian countries. As a minimum target, the White House intends to reduce Iran’s policy space by preventing further rapprochement between Teheran and republics of this region, News.am website believes.

Obviously, the increase in activity of Washington in Transcaucasia also has anti-Russian subtext, Haqqin.az website emphasizes. In the view of Caspian News, noteworthy in this connection are Bolton’s provocative statements regarding the need for Yerevan to break historical bonds which pose challenges to strengthening its position in the international arena. According to Trend News Agency, it was a clear attempt to annoy Russia by showing openly Washington’s desire to pull Armenia into the US orbit. Washington sends a clear message regarding its focusing on the Armenian theme in its dialogue with Russia, and Moscow should be prepared for increased competition, that’s what Stratfor thinks of Washington’s discussions on the issue of US arms supplies to this republic. Furthermore, the USA expects Armenia to show more attention to Washington’s proposals, The Hraparak marks. Washington makes no secret of its discontent with Yerevan which, according to American side, is not making sufficient efforts to strengthen its relations with the West, comments Eduard Abrahamyan, an expert from the Jamestown Foundation (Washington, D.C.-based institute for research and analysis). This is also indicated by criticism voiced by Bolton with regard to Armenian leadership’s decision to send humanitarian aid to Syria under the guidance of Russia, Radio Liberty reports.

The USA clearly means to say to Armenia that it should make adjustments to its political course; otherwise the White House will take Azerbaijan’s stand in Nagorno-Karabakh conflict, marks Asbarez.com website. Signals that are send by such high-ranking American officials as J. Bolton, as well as, R. Mills, who is now moving on from the post of the US Ambassador to Armenia, about the need for resolving the situation through the respect for the sovereignty and territorial integrity of Azerbaijan have become like ‘a cold shower’ for Armenian leadership, prompting Erevan to discuss its next steps, EurasiaNet reports.

As is observed by EVRactiv, the USA sees possibilities for changes in the existing balance of forces in Transcaucasia in the near-term. Haqqin.az website believes that, among other things, a serious deterioration in the situation in Georgia and Armenia in connection with electoral processes challenges them to boost their activity. Washington intends to keep its hand in and to make the necessary adjustments in its Transcaucasian strategy if needed, Stratfor emphasizes.