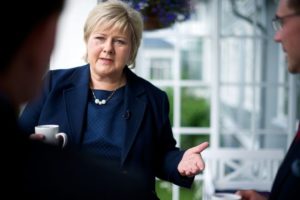 Analyzing the domestic policy in Norway, Aftenposten and Dagbladet state that the situation of the Solberg’s government becomes more and more instable because of the Cabinet’s decreasing rating, which is a result of the corruption scandals involving high representatives of the Progress Party, a member of the ruling coalition. Besides that, according to Dagens Naeringsliv, an extremely negative reaction of the Norwegians was provoked by the information that the “progressionists’” leader, the Minister of Finance Jensen might be involved in abusive financial activity. The web paper Local notices that this fact has put Solberg into a difficult situation. Having stood up for the head of the Ministry of Finance with a view to prevent escalation of controversies with a partner within the ruling block, she was criticized by her allies within the Conservative party, Nettavisen notices. Lots of conservatives urge to hold an independent investigation of the whole case, supposing that Solberg’s softness will lead to a rating loss, comments Dagens Nyheter.

According to the World Politics Review, in current situation some social and economic achievements, which allow distracting public attention from the governmental failures, could become Solberg’s life-line. However, the possibilities of the Cabinet’s head to advance in this direction are limited, Bloomberg states, “A serious obstacle to fasten the matured changes is the escalation of controversies with the Christian Democratic Party (KrF), tactically supporting the government in the Parliament”. The KrF’s President has just initiated a discussion inside the party on cooperation break-off with the conservative coalition, which, according to him, just causes both a decrease of the party’s rating and dissolving of its electoral base, Bergens Tidende says. Taking into account that a possible KrF’s walkout in protest threaten with freezing of the government’s work, Solberg is doing her best to influence Hareide’s party fellows, Adresseavisen notes. From the perspective of the EUobserver, addition of a number of amendments from the Christian Democratic Party’s agenda into the next year draft budget initiated by the head of the Cabinet, which particularly refers to an increase of the measures for migrants’ support, is remarkable.

Despite the efforts, it will be extremely difficult for Solberg to avoid the KrF’s move to the opposition, because it is actively supported by the Labour Party (Ap), Dagbladet says. Its leader Støre who has ambitions to become Prime Minister is tending to get into the act of the Cabinet’s destruction and has already been negotiating with Hareide setting out to create a left-wing government with KrF’s participation, Bergens Tidende comments. Støre makes it clear he is ready to find compromise with Hareide in most of key issues, Local notices. As it is supposed by observers, the Ap’s leader has a good chance to realize his plans. Some KrF’s members are standing for development of the cooperation with the Ap, VG notes. “The background for the creation of a large opposition coalition, which can take the power away from the conservatives, is forming”.