The “Red-Capitalists” Stand Against the Sweden Democrats. Media Review 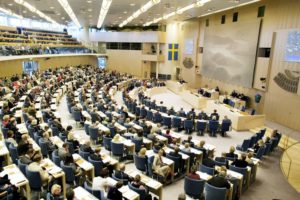 A background for the creation of a ruling coalition made up of social democrats and center-right politicians is being formed in Sweden, The International Business Times and The Business Insider notice. If the Swedish Social Democratic party (SAP) and the Moderate Party (M) have rejected the possibility of the cooperation right after the parliament elections on September 9, now, according to observations of the web-paper Local, they are showing up their readiness to set aside the contradictions, and start seeking for a compromise. The US News and World Report draws attention to the announcement of the former Prime Minister, the SAP’s president Stefan Löfven, on the intention to adopt the M’s leader Ulf Kristersson’s offer (he’s got the mandate to form the government), and to start a constructive dialog. After the assessment of the International French Radio, both the center-right and the center-left politicians have come to a conclusion that creation of an alliance is the only opportunity to block the Sweden Democrats (SD) from coming into power. This populist party is actively using nationalist mottos and has greatly strengthened its position following the results of the election campaign, Reuters recall.

Despite the fact that the formal leading role in the future government will be played by the center-right politicians, the World Politics Review considers the SAP’s president to be the main actor. He’ll try to haggle a number of key ministerial posts for the social democrats, and he’ll significantly influence the Cabinet’s policy, Bloomberg believes. “Löfven lets everyone see he’s going to struggle for the social-democratic values by putting forward an issue on the increase of the governmental expenses during the next year budget discussion”, The Financial Times brings a quotation of an expert from the Södetörn University. What’s more, the SAP’s leader who will scarcely get any significant post in the Cabinet, being content with a “gray cardinal’s” status, will have a possibility to shift the responsibility to the M. If Kristersson fails as the head of the government, Löfven, who has ambitions for the post of prime minister, will act as the savior of the nation, and will get another chance to form the Cabinet, a Belgian web-paper EUobserver.

From the perspective of the Guardian, despite the real chance to form a big coalition in Sweden, the Sweden Democrats shouldn’t be written off. The intention to push the right populists to the road-side of the political life, according to the AFP will turn them into a powerful destabilizing factor. After the forecast of Politico, at the moment the SD will tend to ruin the talks between Löfven and Kristersson. If the attempt to block the reunification of the SAP and the M is failed, Bloomberg expects the SD to assume the firmest measures to destroy the coalition government, which, according to the right populists, cannot live for a long term due to the contradictions within.