Germany and Turkey are together again. Media review 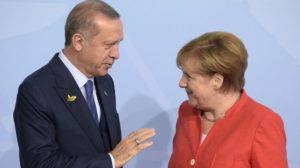 Analyzing the latest international trends, Bloomberg and Voice of America state that the cooling period in relations between Berlin and Ankara has come to an end. Recently, Turkey and Germany have been building up diplomatic contacts, demonstrating readiness to soften the existing disagreements, Deutsche Welle notes. However, according to CNBC, the initiative to normalize the dialogue proceeds from the German leadership. In support of this conclusion, Deutschlandfunk refers to the recent visit of Foreign Minister Maas to Ankara: the head of the German Foreign Ministry “tended to point up the need to renew close ties, since both sides are interested in this.” As Sabah writes, Berlin has obviously realized the utter futility of the attempts to bear pressure on the Turkish authorities. The main motive for reconsidering the approach in the dialogue with Turkey was the fears of the failure of the migration bargain, which can cause an influx of refugees into Europe, Kölnische Rundschau believes. According to an expert from the Carnegie Foundation Judy Dempsey, Federal Chancellor Angela Merkel believes that she will be able to outachieve from President Erdoğan by negotiations, and not by supporting the tough anti-Turkish line of the US administration. The AP recognizes this position as justified, as Ankara has already demonstrated its readiness to seek a compromise, having started fulfilling Berlin’s main demand regarding the release of those German citizens arrested in Turkey on suspicion of extremism.

As Der Spiegel informs, at the moment the parts are busy preparing the planned visit of Erdoğan to Berlin on September 28. During the meeting with the German leadership, the Turkish leader intends to put forward a positive agenda based on expanding cooperation in the economic sphere, Hürriyet highlights. According to Deutsche Welle, Ankara is going to offer German companies favorable conditions for investment, for example, in a large-scale project to modernize the railway network of Turkey. In addition, Erdoğan is likely to announce concessions on the issue of respect for human rights, as the German government will not bypass the problem of strengthening of authoritarian tendencies in Turkey, an analyst of the Stockholm Institute for Security and Development Policy Karaveli believes. The main task of the Turkish president, from the point of view of Reuters, is to achieve the consent of the Federal Republic of Germany to provide financial assistance, the need for which may arise in the near future. According to the Wall Street Journal, this issue is being discussed by diplomats of the two countries.

The normalization of the dialogue with Germany will lead to reduction of proneness to conflict in Turkey’s relations with the EU, Hurriyet predicts. Berlin assisted by Paris is ready to contribute to this. According to French political scientist Pierini, “the first step will be unblocking the negotiations on the issue of concluding a new trade and economic agreement between Brussels and Ankara.” Deutsche Welle sees in the event a good chance to prevent further delimitation of the EU with such an important strategic partner as Turkey, which Germany isn’t going to miss.