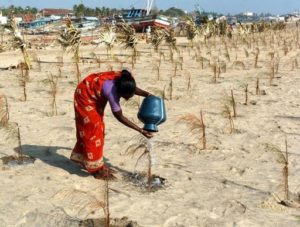 While the interest of analysts and the general public is focused on volatile oil prices, a much larger problem is inexorably maturing on the periphery of public attention. It’s the problem of acute lack of water. Anyway, oil can be replaced by other energy sources while you can never replace water. It sounds very menacing in the light of the disappointing forecasts of global warming. Where will the first shots of the war for water ring out?

Now one of the most dangerous zones is in the North of Africa, at the source of the Nile, where the authorities of Ethiopia are implementing several large dike construction projects. This can lead to a water deficit in Egypt – and, accordingly, to drought and crop failure. Most probably this has caused the extremely intensive rearmament of the Egyptian army and navy. Considering that although Addis Ababa does not have the funds for a full-fledged re-equipment, but there is a huge positive combat experience (starting with the expulsion of the Italian colonizers), it is easy to imagine a protracted bloody slaughter an armed conflict will turn in.

The second zone of a slow but inevitable escalation of conflicts over water resources stretches over vast expanses of Central Asia. So, this year, in the middle of May, the President of Tajikistan Emomali Rahmon said that the volume of water reserves of the country’s rivers decreased four to five times compared to the annual rate. Hundreds of hectares of fields and pastures in Khatlon region that borders Afghanistan have been destroyed by drought. Experts of the international charity organization Oxfam say that up to 30% of the glaciers feeding the rivers of Tajikistan will have partially melted or disappeared by 2050. The authorities of Uzbekistan are also alarmed, according to their data, crops of a strategically important culture for the region – rice this year will be reduced by 40% due to water shortage. This has already led to the rice price growth. The prices have risen by 17% on average.

However, the worst problems the drought brought to the people of Afghanistan exhausted by endless wars. According to the UN, about two million residents of the western and northern regions of Afghanistan were threatened with hunger. More than twenty thousand residents of the western provinces have already left their homes and moved to other, less affected by the drought areas. Of about a thousand of villages in the north-eastern regions of Afghanistan, near the border with Tajikistan, more than six hundred have already experienced acute water shortages. Afghan Defense Minister Tariq Shah Bahrami, linked the May offensive of the Taliban in Farah province with the end of work at one of the local dams. Bahrami made it clear that Iran was behind the attack of the Taliban, which borders on Farah province and seeks to gain control over the water resources of Afghanistan. And this is not surprising, since last winter has become the driest for Iran in the past half-century. More than 95% of the territories of the Islamic Republic suffer from drought, while the average annual temperature has clearly positive dynamics over the past decades.

Problems with water supply in the near future will arise in Kazakhstan as well. The fourteenth largest in the world shallow Lake Balkhash is a source of water for the three regions of southeastern Kazakhstan. Balkhash is filled with water from the Ili River, whose sources are in the Chinese part of the Tian Shan. A few years ago, China began building a canal that would redirect some of the Ili waters to the arid regions of China. So, Balkhash will repeat the fate of the Aral Sea. Agriculture and cattle breeding in Kazakhstan will be extremely affected.

China, in general, is the absolute champion in terms of the number of already flaring up and so far only emerging conflicts on the basis of the division of water resources. Thus, a clash between China and Vietnam is possible – for the use of the resources of the Bei and Xi rivers, as well as with India, which is already experiencing problems related to the depletion of water resources. The groundwater table in the three northern states, including Rajasthan, Punjab and Haryana, falls by an average of 4 cm per year. Beijing, however, uses the benefits of its geographic location rather cynically, since it is the glaciers of Tibet that provide the world’s greatest river system with melt-water. The waters of these rivers are vital arteries not only for the two most densely populated states – China and India, but also for Bangladesh, Myanmar, Bhutan, Nepal, Cambodia, Pakistan, Laos, Thailand and Vietnam. These countries make up 47% of the world’s population. And the keys to their future prosperity are in the hands of Beijing. Yet, for the sake of justice, it should be noted that China abuses its advantage for a significant reason – 2.5 million square kilometers of the area (half of China’s fertile land) are threatened by desertification, which seriously jeopardizes China’s ability to feed its population.

Thus, even with a cursory glance at the world map, you can see several zones of potential large-scale conflicts over water resources. Nobody is capable to predict the outcomes of these conflicts. It is clear however that our planet is going to face only problems in the coming decades.