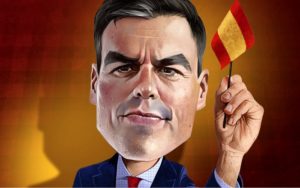 According to Politico, against the background of anti-Brussels opposition of some of the newly elected European leaders, position of Spain’s Prime Minister Sánchez looks like a consistent support of the EU main powers and most of all France. U.S. News & World Report highlights, that the first foreign visit of the Spanish PM to France was not a coincidence. “Sánchez’s public approval of Macron’s reformative aspirations has the goal to strengthen relation with France,” believes Professor Alvarez-Castro from the University of Florida. As observed by the analyst of the European Council on Foreign Relations Manzano, during the June summit of the EU in Brussels head of Spain made it clear that he shared key agenda points of the French leader and was ready to promote them.

Observers unanimously attribute to Sánchez an aspiration to expand delegation of the Spanish Socialist Workers’ Party (PSOE) in the European Parliament following the results of the elections due to take place in the spring of 2019. Público notes, that the Prime Minister is concerned about profound crisis that affects the left-wing forces in Europe and is ready to make all efforts to restore their former influence. Understanding the impossibility to solve this vast task on his own, the head of Cabinet of Ministers plans to revive the Iberian Union with Portugal. EFE news agency believes that the intensification of dialogue between Madrid and ideologically close socialist government of Antonio Costa confirms his intention. Lisbon also shows interest in broadening cooperation which is also considered as a way to increase Portugal’s influence on the world scene, as reported by Expresso.

From the perspective of Belgian EUobserver, Spanish authorities have stepped up their efforts on the global arena due to some domestic political reasons. The Independent points out that Sánchez needs to strengthen his position in the dialogue with the left parties who support his minority government. Tactical partners including the left-wing populist party Pondemos increasingly criticize the Prime Minister for his unwillingness to fulfill the promise to develop social and economic spheres. El País supposes they could drop the support of PSOE. Understanding that hasty actions to review the measures of rigid economic policy may result in conflict with the EU leadership, Sánchez tries to allay concerns of his allies by continuing the open doors policy. However according to Reuters, posing as the defender of human values, the Prime Minister creates conditions for growing of nationalist tensions in society. Spaniards who till now avoided the migration-related problems may face them in the nearest future, warns the Spectator. Diario believes if Spain will not review its migration policy, the country may repeat the fate of those European nations where right-wing populists have taken power after people got angry with the increasing number of migrants.