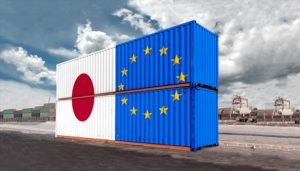 The Japan Times indicates that Japan and the EU are entering a new phase of their relations, ‘Tokyo and Brussels are actively getting closer owing to similar problems in their dialogue with Washington’. In the rhetoric of European and Japanese leaders EuroNews is hearing the appeal for forming an alliance with the aim to stand up to the US policy of protectionism. The Asia Times presents Japan’s Prime Minister Abe as an initiator of strengthening ties between Japan and Europe. Whereas previously he used to avoid criticizing the White House, striving to act as a mediator in disputes between Washington and Brussels, after the G7 Summit in June he reviewed his position, The Diplomat pointed out. Abe was being severely pressed by President Trump, who threatened to raise customs duties for Japanese cars imported into the USA, and then began searching for allies in the ongoing ‘tariff war’.

The Financial Times qualifies the recent signing of Economic Partnership Agreement between Tokyo and Brussels as a significant step in building relations between Japan and the EU. According to Tagesschau forecasts, this document will form the basis for establishing the world’s largest free trade area (FTA). Although both sides made significant contributions towards resolving disputes, the Asia Times considers that the speeding up of the FTA establishment between Japan and the EU is a consequence of substantial concessions made by Abe. ‘The improvement in levels of trade and investment cooperation with Europe is of particular importance for the Japanese leader’, Dr. Irina Angelescu, Council on Foreign Relations (New-York City) Hitachi Fellow at the Japan Institute of International Affairs (JIIA), comments on the developments. In fact, it is the only thing which can drive up the Japanese economy now in need of facilitating. Moreover, Abe really hopes that by providing increased competitive advantages to Japanese companies on the EU market he will be able to strengthen his own political positions before the September election of Japan’s ruling party (LDP) president, The Diplomat suggests.

According to Die Welt forecasts, Brussels and Tokyo will not stop merely at deepening their trade integration. The EU leaders make it clear that they view the agreement with Japan as a good starting point to intensify political and military relations, EURACTIV reports. Brussels is going to involve Tokyo in advancing its interests in the Asia-Pacific region, hoping to expedite the conclusion of similar agreements with other states of this region. According to The Business Times, ‘this refers, in particular, to Indonesia, Australia and New Zeeland, those countries with which Europe has already entered into negotiations on economic matters’. The Handelsblatt considers it essential for the EU leadership to make advances in this area if it really wants to act as ultimate protectors of the world’s free trade.

Abe Europe Japan trade wars Trump USA 2018-07-28
sc
Previous: Why the World Will Not Be the Same
Next: Back to the Middle Ages. Media Review
Subscribe
0 Comments
Inline Feedbacks
View all comments