Why the World Will Not Be the Same 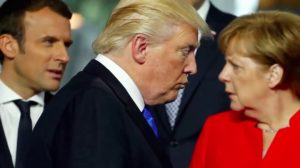 Observing the world’s leading economies, it’s easy to see that there has been a split between the US and other countries of the Western world, which is getting deeper and deeper. Saying “the Western world”, I mean not only North America and Western Europe, but also some other countries pursuing a single globalist policy (for example, Japan, Australia). The United States has always been the undisputed leader among them.

Before the meeting of the G7 in Quebec, one could hope that it was not a split, but a temporary disagreement. But the refusal of the US president to sign the final communique of the summit is an unprecedented event. After all, the United States has always determined the policy of the “Big Seven”, and the participating countries followed the specified course.

The reason for this behavior is understandable. It’s the struggle for markets, and the protectionist policy of Trump. He openly favors the interests of American companies and puts them in priority before the world.

But there is a deeper reason. The fact is that Trump can in no way be called the conductor of globalist politics. Conversely, he’s a representative of traditional, industrial America. He managed to beat in the 2016 elections the representatives of the globalist trend, acting through his opponent Hillary Clinton and his predecessor Barack Obama.

But the rest of the Western world keeps following the old policy. Almost every leader of the G7 countries is a protégé of the world financial elite and represents its interests. Trump also gets out of this “slim chorus”, having entered into an open conflict with it. Perhaps, now we are witnessing the formation of two opposing poles of the modern world. It is possible that the confrontation between “industrialists” and “globalists” will be no less severe than the confrontation between the socialist and capitalist worlds in the XX century.

The problem is that the globalist idea has exhausted itself, and Trump and his supporters offer nothing new. They just want to return to the past, to the old “good” capitalism.

It seems that all this will lead to the destruction of the current world order, where the ruler of the world is the “collective West”. Perhaps, the world will become more colorful. In parallel, there will be several world systems, none of which will have priority over others (for example, globalist, capitalist, Islamic, communist, etc.).

In these unpredictable conditions it is difficult to say what awaits Russia. As a result of changes in the global landscape, the country can get both great advantages and serious problems. In any case, one must understand that the world will never be the same again.