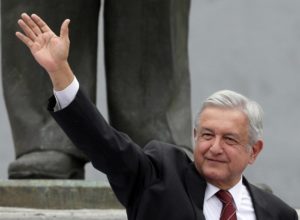 The recent victory of the candidate from the Left Alliance Andrés Obrador in presidential elections in Mexico will contribute to further cooling of relations between Mexico and Washington, most commentators believe. The New York Magazine observes, Andrés Obrador will continue to be commensurate with the reputation of a tough critic of the US Administration, which he has obtained during the elections. El Universal considers he is capable of restoring positions that the country has lost during Nieto’s ruling in its dialogue with the USA. According to CNBC, it is expected that there will be further escalation of Mexican leadership’s rhetoric towards ‘repressive migration policies’ and protectionist economic policy of Donuld Trump, which has already resulted in declines in trade between the countries. El Financiero points out that Andres Obrador will not make any meaningful unilateral moves towards the White House though rhetorically he supports the North American Free Trade Agreement (NAFTA). In the view of the well-known intransigence of the US President’s position, the hostile tone of Andres Obrador threatens to fatally disrupt the NAFTA negotiations, The New York Times reports.

The Mexican leader is already preparing for possible aggravation of economic problems because of difficult relations with his northern neighbor. In this context, The Washington Post draws attention to Obrador’s plans for strengthening relations with other states and regional groupings. Mexico is betting on increased investment cooperation within the framework of the Community of Latin American and Caribbean States. In the view of Goldwyn, an analyst from the Atlantic Council (Washington, D.C.), the decision to make adjustments to the left-orientated electoral program for the country’s development should help improve the business climate and increase the country’s attractiveness for foreign investments. ‘By postponing the implementation of a number of the planned reforms, the President is seeking to reduce concerns of foreign partners about the possible transformation of Mexico into another Venezuela’, the expert from Monterey Institute of International Studies A. Fernandes believes.

According to Bloomberg, the Mexican population is awaiting from the new head of State, who has won the elections under the motto of a need for great changes in the country, not only economic progress, but also a practical solution to such an acute problem as corruption. Andres Obrador intends shortly to start the uncompromising struggle against dirty bureaucrats, which is aimed at paving the way for further positive changes. However, Rede Globo remains doubtful of the President’s ability to make tangible progress in the implementation of his plans. By initiating lustration process in organs of his government, the head of State risks turning influential representatives of local elite against him, as well as, triggering conflict with the country’s bureaucratic apparatus, which will make it very difficult to carry out reforms.

Mexico NAFTA Obrador Trump USA 2018-07-20
sc
Previous: A new round of the old struggle. Media review
Next: Why the World Will Not Be the Same
Subscribe
0 Comments
Inline Feedbacks
View all comments