A new round of the old struggle. Media review 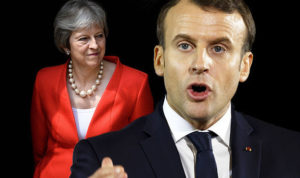 Many observers mark that France and Britain do not want to move on to the practical implementation of the stated steps towards encouraging their closer interaction. ‘Shortly after the visit of President Macron to the United Kingdom in January, there were many predictions concerning development of bilateral relations, but the more recent rhetoric of the French leadership has hardened’, The Daily Express reports. According to The Local, currently Paris shows that London is perceived not as its partner, but rather as its rival. The Times, for its part, imputes to France the intention to deprive the UK, after its EU exit, of access to the databases of the EU law enforcement community and its status of the technological leader in Europe through poaching staff from leading IT companies. It is as if voices of those, who are in favor of continuing the historic rivalry between two countries, have prevailed in the French leadership, The Independent emphasizes. The Wall Street Journal believes that the plans of Paris to extend the use of French as the main language for communication between members of the EU governing bodies to the detriment of the English language is a clear evidence to this. Such changes in the attitude of the French authorities are described by The New York Post as the weakness of the political will of Theresa May. Due to disagreements within her own Cabinet, it is hard for her to advance the UK interests in the dialogue with the EU ‘locomotives’, which President Macron is seeking to exploit.

Such aggravation in relations with Paris is a wake-up call for London as this may have a negative impact on the already tense situation in the Brexit negotiations. The Guardian predicts that ‘T. May can hardly hope for Macron’s understanding and his support for the successful conclusion of the deal that is profitable to the United Kingdom’. However, the UK leadership leaves no hope for giving additional impetus to the dialogue with Paris through accepting its will on some matters. London has already made the first steps in this direction. That is how The South China Morning Post views the decision of the UK government to organize, jointly with France, a maritime operation for warships in the South China Sea with the aim to exhibit military might in that region. Furthermore, Great Britain sent its military commitment to increase the size of French military mission in West Africa, so as to reflect the unity of purpose among two countries in the security sphere, AFP reports.

Nevertheless, T. May was put in a rather difficult situation. According to The London Evening Standard, the government of Great Britain needs influential partners in the European area, and it hardly needs to continue relying on the support of Paris, ‘Given that situation, it would be more appropriate to move closer to Berlin’. T. May now has more in common with German Chancellor Merkel than with the French leader, which can provide the basis for establishing close interaction, The Economist believes. Among all-inclusive themes, Sky News focuses on growing discontent with current policy of the US Administration. The G-7 Summit in Canada, according to The Independent, showed the disregard of the US President Trump towards Great Britain and let her express solidarity with the EU, thereby creating conditions for enhancement of the dialogue with Berlin.