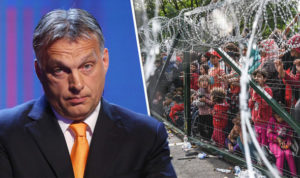 Prime Minister of Hungary Victor Orbán confirmed his reputation as one of the most consistent opponents of common European migration policy. The Guardian believes that the package of documents adopted by Orbán’s rubber-stamp Parliament and toughened up the regulation on reception of immigrants by imposing criminal liability for persons, who facilitate illegal migration, is a direct challenge to Brussels. According to Politico, current Hungary, in fact, is closed to all asylum-seekers. In the view of the Herald Sun, changes in the legislation concerning arrivals are a part of a major program that is oriented, in the words of Orbán, towards the establishment of ‘illiberal democracy’ in the Republic. U.S. News & World Report connects new initiatives with amendments to the Basic Law which are aimed at exerting government control over the judiciary. ‘It is just the first step of the Chief of the Hungarian Cabinet in the direction of enlargement of his powers’, strongly believes Attila Tibor Nagy, the expert from the Centre for Fair Political Analysis in Budapest. ‘Orbán has made it clear that soon he intends to review totally the 2011 Constitution that is no longer relevant’.

According to Pocij, an analyst from the University of Chicago, current Hungarian leader, who has broad support of the country’s population, will hardly face severe obstacles in the implementation of his plans. Opportunities of opposition, which is in deep crisis, to influence attitudes in the society are extremely limited. According to the Internet edition of Origo, until recently, the Movement for a Better Hungary (Jobbik) was the only force capable of presenting a credible challenge to such Hungarian ruling party as the Federation of Young Democrats (Fidesz) or Hungarian Civic Alliance (MPS). But the Jobbik splintered due to internal disputes within the party, which were exacerbated in the recent years. Now former vice president of the Jobbik László Toroczkai is forming a new political movement that, according to Magyar Nemzet, may become a tactical ally of Fidesz-MPS. Toroczkai, who is in favor of strengthening control of the EU external borders, is impressed by Orbán’s rigorous approach to the resolution of migration problem.

In the view of the New York Times, the situation in the European area also creates favorable conditions for Orbán. Even if the Chief of the Hungarian Cabinet once again faces pressure from the EU leadership, according to the Daily Telegraph, he will be able to count on the support of those states (first of all, Austria and Italy) that are outraged by Brussels’ policies. Vienna and Rome are ready to stand up for Budapest as Hungary is perceived as their important ally for conducting a dialogue with the EU ‘locomotives’. This will encourage Orbán to advance his agenda on migration more actively as the Internet edition YU Observer considers that ‘he will try to offer the Hungarian model as an example for other countries of the European Union’.