United Nation of the Space 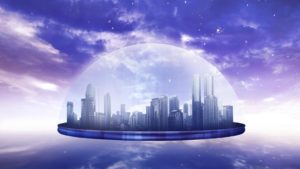 Let us start with an axiom that is, unfortunately, often ignored by politicians – humanity is vulnerable. Our species is concentrated on one mother planet. Another large asteroid, an explosion of a super volcano, or an unsuccessful (for us) virus mutation will be enough to make the humanity devastated. Of course, the same fate awaits the population of the Earth in the event if political adventures lead to a full-scale nuclear war. The only guarantee of survival for Homo sapiens is colonization of space, and this task is beyond the power of any single country, even a superpower. It can be solved only by the efforts of all mankind. And in this sense, globalization projects that are implemented at absolutely all levels, beginning, of course, from the interstate, acquire special significance.

However, what interstate initiatives do we see? There is no noticeable progress. Despite all the loud claims about globalization, erasing the borders among people and other blah blah blah heard from the high tribunes during the last decades, the only real unification project created by politicians was the European Union, which is cracking at the seams before our eyes. From this perspective, we have to focus on private, civilian attempts to transform our planet, to accelerate transformation of the shameful for the XXI century conglomerate of the shrewish egoists into a single community, capable of a trip beyond the Earth’s orbit seriously and for the long haul.

Severe pragmatism tells us that in the conditions of market relations no global Earth project can exist without this or that variant of a single, universal currency. One of the most successful attempts to create such a payment tool is bitcoin, which appeared in 2008 when programmer Satoshi Nakamoto (or a group of people under this pseudonym) described in the web the operational algorithm of a quasi-monetary tool. Almost nine years later, the capitalization of the bitcoin ecosystem reached about $53 billion, and up to 40 million people use it for making their payments. That means the realization of a great idea has done without the slightest assistance of any state institutions!

But, of course, private initiatives in space are of the greatest interest. At the end of the last century, anyone who put forward the issue of private astronautics would be laughed at. Well, here you’re! Elon Musk’s SpaceX corporation just in ten years from the object of toxic speech turned into a contractor that now performs almost a third of the world launches (including military ones), and develops a heavy launch vehicle for reclamation of neighboring planets! However, the brainchild of Mask, thanks to appropriate PR, is heard even by people who are not interested in the space theme. Therefore, briefly mention other interesting private undertakings. For example, the company Blue Origin, founded by the owner of Amazon online store Jeff Bezos, which announced the development of its own re-usable booster with its own engines BE-4. In the early 2020’s (i.e. very soon), tests of the New Glenn space vehicle are beginning. Most likely, Blue Origin will be the first company after SpaceX, able to fully re-use the first stages of its carriers.

Also a Zelanian (surprise!) space start-up Rocket Lab looks compelling. It was initiated in 2006 by local entrepreneur Peter Beck and sent to space a new carrier vehicle Electron, which brought into the orbit three small satellites. Rocket Lab was the first private space company that owns a personal launching site.

In 2012, after reorganization and rebranding, company Planetary Resources started its existence. Its goal now is no less than expanding the natural resources base of the Earth by developing and implementing technologies for industrial reclamation of asteroids. But this company was proudly alone not for long. It was as soon as January 2013 that creation of company Deep Space Industries or DSI was announced. One of the initial goals of the company is refueling communications satellites. Also, close cooperation with NASA on the near-Earth orbits in missions to Mars is expected. In the medium term, DSI plans to build an interplanetary communications network, as well as some orbital energy generators, in the long term it plans to colonize the Solar system, and to extract resources from asteroids.

So, there are many such amazing examples of challenging non-state space start-ups. The seeds of the philosophical ideas of cosmism, directed primarily to the unification of the mankind around the super-task of the space colonization, grow up in some certain deeds of our contemporaries. It is curious that one of the most interesting projects from the perspective of development of universal human morality and the upcoming “space” right – Asgardia – was born in Russia. That proves the undying (since the last century) interest of the country to everything related to space exploration.

Asgardia (the Space Kingdom of Asgardia) was announced to be established on October 12, 2016. It is a state created in space and a nation considered by its founders as free and independent from all existing countries. One of the goals announced was recognition of Asgardia as a separate state. On November 12, 2017, Asgardia launched its first satellite. According to the plans of the Space Kingdom, the final point is a real colony of Asgardians to appear on the orbit. Despite the fantastic nature of the project, it is materially and financially much more realistic than Mars One, the project of private colonization of Mars. But even if the idea is not brought to a close, the experience of such kind of joint work of representatives of different scientific disciplines, commercial structures and manufacturing industries over something that may become a prototype of the United Nation of the Space cannot be overestimated in the long term.