You should live a clean life. Media review 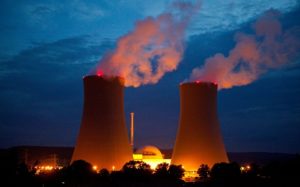 Observers notice the commitment of Germany to the course of complete abandonment of nuclear energetics. The government of the Chancellor Angela Merkel, which initiated the adoption of a law on the shutdown of all nuclear power plants on the territory of the country till late 2022, keeps carrying out a coherent policy in this issue. According to Handelsblatt, the authorities overcame the resistance of German energy giants RWE and E.ON, that try to put off the shutdown of the nuclear power plants, and confirmed the plans, according to which in two decades 65% of the electrical power would be generated by solar and wind power plants. Together with that, the German leadership isn’t going to be limited by the development of the green energy just on the territory of Germany. It’s noteworthy that Berlin recently started pressing heavily on some neighbor countries, demanding to follow its policy. As the Bazler Zeitung writes, the Czech Republic and Switzerland, which authorities are dissatisfied with the fact that German government constantly declares the local nuclear power plants aren’t secure, and urges switching to more expensive alternative technologies, are under pressure.

The intensification of German governmental policy directed to the further resistance to the nuclear power plants construction inspired other European foes of peaceful atom. This applies primarily to Austria and Luxembourg that traditionally stand for switching to renewable energy. The leaders of these countries make it clear that they bet on the creation of a powerful anti-nuclear alliance within the EU. The Agora vox ascertains, ‘Supported by Berlin, Vienna and Luxembourg expect to make their position clear for the EU executive power’. According to the Politico, the question on the further use of the nuclear power plants is to be put forward at the next meeting of the EU leadership. The international French radio doesn’t except that at the initiative of Germany and its partners, in the near future, more stringent regulations will be adopted that apply to the control over the nuclear energetics within the EU.

The topic of nuclear power plants may become another problem in the dialogue between Germany and France. Although president Macron agrees to reduce the share of the nuclear power plants in total energy balance of the country to 50%, he’s not going to carry out a complete switch to the renewable energy sources. The Mond notices that French energy business is going to realize a tough opposition to Berlin’s initiatives. Thus, EDF, the biggest nuclear power plants’ operator, doesn’t mask its skepticism about the rejection of the nuclear energy. The company made it clear that it would use all its possibilities to defend the business interest. The Spiegel assumes the conflict will be just stronger with time, ‘Berlin and Paris have to coordinate their strategies on the European energy market because the German authorities won’t stand France trying to dominate there’.