PROGNOSTICS XXI Part 2. The shepherds and the flocks 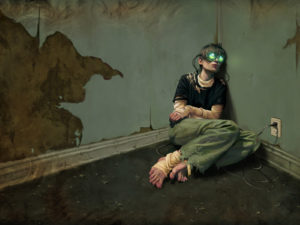 The previous part of the Prognostics, devoted to technical unemployment, ended with the question, ‘Will humanity revolt against industrial robots depriving people of their livelihoods?’ In this part, we will try to give a reasonable answer to it.

Approaching to any statement on the issue follows the identification of a fundamental circumstance, namely, who is behind the active automation of production processes and the development of ‘artificial intelligence’ (AI). After all, it’s not aliens who finance expensive research and development in the field of AI and robotics, with the goal to actively introduce them into production. Such a costly investment is carried out by the terrestrial owners of these same industries. What do we know about them? According to the Swiss banking conglomerate Credit Suisse for 2016, the savings of the 72 million moneybags (1% of the world’s population) reached 125 trillion dollars and exceeded the total savings of the rest of the world. It is the percentage that determines the future of their assets, in effect, shaping the destiny of other people.

So, now we know who will in the near future deprive the work of us and our children. But why did they decide to follow such a seemingly risky path, fraught with mass riots that could turn into a revolution threatening to sweep away the entire capitalist way of life? English publicist of the XIX century Thomas Dunning believed that the explanation is extremely simple – the lust for profit, that is, ubiquitous greed. ‘Provide 10%, and the capital agrees to any application, at 20% it becomes brisk, at 50% it is surely ready to break its head, at 100% it tramples all human laws, at 300% there is no such a crime that it would not go nap on even under pain of death”.

Yet, we believe that not everything is explained so simply. A modern capitalist differs from his or her XIX century ancestor, the way a modern killer whale differs from a fossil Dunkleosteus. Both are absolute predators, but the first one has incomparably greater intellectual, evolutionary ‘bonuses’. It is not limited with the greed itself. Therefore, we can state with certainty that all the production and social transformations capable of putting the world capitalist system under attack were subjected to a deep and comprehensive analysis long ago. Consequently, provoking a rapidly advancing shaft of technological unemployment, our ‘golden pyramidion’ is absolutely sure that it will keep the situation under control, and will retain its dominant position in the planetary hierarchy.

Of course, we don’t have an access to their classified research, but this isn’t necessary. The data that is in the public domain is enough. Quite representative for the developed countries of the West will be the US statistics, given the traditionally higher mobility and motivation of American workers in comparison with European workers (which was always due to less social security on the part of the state). In America, only people officially registered in this status are considered unemployed. It is curious that a new trend appeared on the American labor market in the 21st century – a conscious, mass refusal to work (for every compulsorily unemployed male American at the age of 25 to 55, there are three people who not only never worked, but did not even try to look for a job).

Moreover, according to the US Bureau of Labor Statistics, this non-working army of males, having a huge amount of leisure time, spend it mainly on watching TV and surfing the Internet. That is, millions of males of working age can, it turns out, afford not to work. Allowances for disability and poverty cannot provide a luxurious life, but can become a long-term alternative to paid work, which is used by more and more people. A direct consequence of the refusal to seek work was the decline in geographical mobility. In 2016, the number of crossings of families from one area to another fell to a minimum (for the entire post-war period).

What does all this mean? It’s a curious and in some way funny paradox – in the USSR they tried to build communism, under which the rule ‘from each according to their ability, to each according to their needs’, but it is the hardest capitalists who bring this communist utopia closer to the earthly embodiment. And is it really such a utopia? Rather, on the contrary. Marx believed that in a communist society, ‘labor will cease to be only a means for life, but will itself become the first need of life’. As you can see, it does not. The needs, apparently, are different. Millions of able-bodied males are ready to live on benefits, drinking beer and staring at the screen. As for the super activists of labor, who are psychologically yet not ready to reach out for a humiliating social handout, there was invented another trough, under a more euphemistic name – unconditional income. Unconditional basic (or essential) income involves the regular payment of a certain amount of money to each member of the community by the state or another institution. Payments are made to everyone without exception, regardless of the availability of other income and without the need to perform work. Experiments in this direction are conducted most actively (the ‘golden percent’ is willing to share the fewer in order to withhold the greater). Only the pace of decriminalization and later legalization of marijuana is in advance of these experiments. And it’s no coincidence, because alcohol can awaken Luddite aggression in the crowds, when smoking marijuana can provoke only to eat fast food and listen to rastaman songs about ‘fighting the system’.

Thus, we can quite predict the absence of any prerequisites for mass protests of the future army of the unemployed. Social housing, unconditional payments, cheap food, weak alcohol and ‘light’ drugs, an increasingly interesting ‘virtual reality’ will lead most of the population of industrialized countries to socio-political apathy. The herd will obediently go where the shepherds drive it.

benefits EU marijuana unemployment USA 2018-07-03
rumpelstilzchen
Previous: Is there a civil society in Russia?
Next: You should live a clean life. Media review
Subscribe
0 Comments
Inline Feedbacks
View all comments