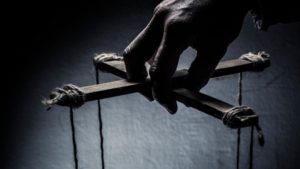 There are at least two Histories. One of them is obvious and publicly available; the other is covert, hidden from the eyes of outsiders under the cloak of secrecy. And it is not hard to find which one is true. Dozens of thousands of learned scholars, holders of authoritative scientific regalia may intensively research the field of public History, but are unable to make correct conclusions as some underlying basic data blocks are hidden from them. However, basing on circumstantial evidence, it is quite possible to try to imagine what is behind the veil.

Certainly, it is true for this historical moment, too. Secret policy of real centers of power creates the true History, by giving the majority of laymen the opportunity to enjoy this whole mess in which public politicians act as puppets. They are needed to serve not only as implementators of real power’s guidelines, but also as a tool to fulfill some specific needs of the general public. Experiments on monkeys have shown that apes are ready to share their primary resource, namely, the food in order to watch two things on a TV screen – mating and activity of higher life forms.

And then we come to the basic question of how they benefit from pulling strings. The answer is obvious: interests in this issue lie in having control over the main resource of the human species – human consciousness. It makes no difference whether an individual, syndicate, if not a state, own tremendous financial assets, industrial enterprises, the natural wealth resources or powerful weapons. When one controls consciousness through manipulation, he or she automatically becomes the true master of all what is mentioned above. And what can you possibly need such kind of control for? What is the main task for global manipulators? It would be naïve to believe that those people, who are at the helm of real power, only realize common human complexes and ambitions. That could be true for individuals, but not for the system as a whole.

It is appropriate here to make a short aside: unlike the conspiracy theorists at large, I’m not attracted by the idea of a single ‘world government’. Our species have objective physical limitations on reception, transmission and reflection of information provided. Thus, natural limitations and vulnerabilities of the human brain, to date, are legal obstacles to realization of the vision of global government although, obviously, this idea will become a reality thanks to scientific and technical advance. And it is probably one of the main reasons for the emergence of the idea of global control per se.

In the current situation, the main aim of shadow masters of the world is to create New Humanity. It is rather obvious although certainly we do not know all the details, as well as, what is understood by the term ‘a whole new man’. We have an opportunity to observe the activities of the first layer of policies, I mean, public policy processes, and try to guess its guiding principles, focusing on merely superficial manifestations. Long-term observations detected several interesting things. First, as I’ve said above, there is no single global governance body that takes final decisions. There are several centers of real power, namely, Atlantic, European, West and East Eurasian and others. Secondly, species limitations mentioned above and that are especially important for supporting communication activities, together with competition within the elite and an inherent right of intellectuals to be wrong, can lead to mistakes and conflicts.

The situation in the USSR is a classic example of fatal failure in the operation of the shadow system of governance. By the end of the 20th century, this controversial, but rather curious project has not yet exhausted all the possibilities and reserves available. It was quite suitable for managed modernization as demonstrated by the doctrinaire and rigid practice of Maoist China, the country that ‘rose from the ashes like the Phoenix’. But the USSR was just sold out. And it did not matter that the majority of the population was against the country’s partition. This grand contracted experiment was carried out with the involvement of Atlantic, European and West Eurasian centers of power and advancement of integration of the country’s vast territory into political and financial structures under their control. The experiment has not proved generally successful. If the ‘liberated countries’ of Eastern Europe and former Soviet Baltic republics quickly and easily joined the EU family, then the other USSR territories faced a different fate described by Russian President Putin as a ‘geopolitical catastrophe’. But that was a catastrophe for ordinary people. As for those, who made the decision, it was a political fault that brought with it the loss of control. And they had to deal with this failure.

It is easy to see that just during Yeltsin’s presidency, Moscow followed its usual course of public ‘confrontation’ with the USA (Iraq, Yugoslavia, etc.), and then, during Putin’s ruling, it chose the course of ‘restoration of the Soviet Empire’. The cancellation of the previous (Soviet) experiment, attempts to accelerate integration of vast Eurasian territories and to reform consciousness of multi-million society, in a short time, proved impossible. As a result, carefully constructed enormous military and political structures (in short, instruments for influencing policy), such as, for instance, NATO, became absolutely unnecessary. They decided to push the pendulum of history back into the other direction. And now outsiders are graciously listening to the stories that make your heart freeze and telling about so-called ‘civilizational conflict’ between the USA and Russia without thinking of how the situation of this artificial ‘conflict’ strengthens controls of Atlantic and West Eurasian centers of power over areas of their interest. Everybody gets what they wanted. I mean an increase in defense expenditures, achievement of population consolidation, expansion of control, and all that. Russia that is under ‘horrible’ sanctions shows steady economic growth and achieves access to strategic ports in the Mediterranean Sea while its Atlantic counterpart delicately takes Great Britain under its wing and increases military presence on the territory of continental Europe. And along the way, trade war is declared. But it is not the war against such official ‘antagonist’ as Moscow, but against rather more dangerous economic competitor – Europe’s rival. Meanwhile, naïve outsiders who do not know such ‘details’ continue to believe that the Second ‘Cold War’ has almost begun. Blessed are they who believe in it… But it is better to look at the world through open eyes.