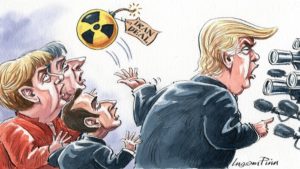 Many European news media tend to state the fact that the withdrawal of the US from the Iranian nuclear deal has politically cornered the European Union. Even though the decision of the US administration was predictable, Brussels and Europe’s ‘locomotives’ turned out to be unprepared to offer effective response actions. During the recent trilateral consultation, leaders of Germany, France and Great Britain did declare there was a need to protect European companies that cooperate with Iran, but they confined themselves to vague generalities. That can partly be explained with disagreements between Berlin and Paris on the part of what tactics is advisable to choose in the dialogue with Washington. If France still counts on reaching a compromise and arguing the USA into making an exception for European companies, then Germany advocates a hardline approach and, in actual fact, suggests evading the US sanctions. The skeptical attitude of German authorities towards the prospects of reaching arrangements with Washington is quite explainable. Europeans have weak negotiation positions while the White House is not willing to take any steps to moderate the pressure on Teheran.

In the midst of the aggravated contradictions between the US and the EU on the occasion of the Iran issue, a growing number of European analysts bring up a question whether there is any potential in transatlantic relations. Discontent with the White House is growing first of all among German leaders. As significant German news houses note, it is getting highly complex to conduct a dialogue with the United States since the activities of the White House can hardly be named inter-allied or even partnering. Together with that, despite the public criticism of President Trump’s course by representatives of European socio-political circles, many EU high-ranking officials prefer to be modest while speaking out of public view and call for further negotiations with the US. ‘Europe is clearly not ready for reconsidering the pattern of relations with the USA, since the process of creating strategic autonomy that was announced by Chancellor Merkel is still embryonic’, asserted Professor at Regensburg University Stefan Birling.

Almost all observers agree that new steps by the USA to the detriment of the concerns of the EU will give fuel to the process of strategic division of NATO partners. According to Walt, a research associate at Harvard University, Europe lacks determination for conducting independent policy. However, with his activities, Trump leaves little choice but adjusting the course line. In the nearest time, Europeans will have to take an exam of critical importance. In case they fail, the EU is unlikely to stay among leading players on the international scene.

“In case they fail, the EU is unlikely to stay among leading players on the international scene.”
Even if the EU fails to stand up to the US in that particular case, it’s highly unlikely that its position on the international arena will diminish to the extent that it will be excluded from the leading players. The rise of nationalism and protectionism in the EU was triggered long ago, and succumbing to Trump now may well become the turning point in the tide of righ-wing populism engulfing at least half of the Union. That in itself is the direr of the consequences, as it may lead to the collapse of the European institutions, causing chaos and instability all around the continent. This ought to be the primary concern of those wielding power now in Berlin, Paris and London (in lesser part).

There is no doubt that Trump will continue his aggressive rhetoric towards Europe. My advice to European countries, especially to France and Germany, is to seek a divorce from the US.

Maybe they hesitate, ’cause they wait for the US citizens and Congress to impeach Trump? Who knows what concessions the next POTUS will make to Europe just to make amends…

Trump is not independent in his plans for Iran. I am sure that the break in the deal between the US and Iran are to blame for his advisers. Trump is not a politician, he is a businessman. That explains his plans for China and Europe. Make America Great Again!))

Once again, the key problem is not in Iranian deal itself. It has to do with the fact that the strongest global power ignores its own obligations and disturbs the international consensus. In other words, the question is as follows, in case the USA is regardless of the world order, does it still need to be regarded at all? There are a few options: 1. we only need to be out of the way of Washington while all rules may go to hell; 2. we have to maintain the system of international relations even if it goes contrary to the US; 3. at the moment, a new global system is being developed and they who are adhering to outdated notions are going to lose. Perhaps, there are some other options.

The Iranian deal may not be the key problem, but it certainly is the first of such great magnitude. All previous ‘misdemeanours’ of the US are comparably minor, they never outweighed the benefits of economic and military cooperation, while now the rift between the US and the EU may well be too great to heal.

Yet, as I have mentioned before in this thread, the EU leaders may be just waiting for Trump to be impeached to make new deals with his successor. Considering the pace of Mueller investigation, it may happen pretty soon…