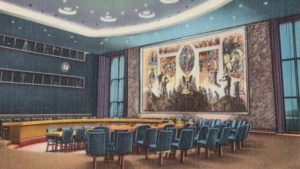 UN Secretary General Antonio Guterres in an interview to Swedish SVT expressed his strong wish to carry out principled structural reforms in the UN starting with the Security Council. ‘We face structural problems since the Council represented the world as it had been after World War 2 and not the world of today. The veto is used too often. As I have repeatedly said, it would be impossible to fully reform the UN without reforming the Security Council’.

Deutsche Welle, in turn, reminds that Russia has used its Security Council veto 11 times to block actions targeting Syria. Also, the Secretary General of Amnesty International is quoted as saying that the Russian veto ‘needs not be end of efforts for collective action by the UN’.

Western nations agreed on the position to bypass Russian veto referring the issue of chemical weapons use in Syria. For this purpose, the resolution called ‘Uniting for Peace’ adopted during the Korean crisis in 1950 will be applied, says The Guardian. It would enable nine members of the Security Council to bypass the veto of a permanent member of the Security Council and refer the matter to a full vote at the General Assembly, which can decide by a two-thirds majority. Guided by ‘Uniting for Peace’ resolution the General Assembly is competent to take action if there appears a threat to peace or an act of aggression takes place while the Security Council cannot meet its responsibilities over it because of a lack of unity among its permanent members.

Thus, it is safe to say that the situation with the long simmering reform of the UN is finally getting off the ground. The US acting administration and Mr. Trump personally, who has declared his unwillingness to finance organization which activities run counter to the American interests more than just once, are the main initiators of the process. Considering the fact that exactly Washington is currently the largest UN financial donor, there is no wonder that its secretary-general could not but react. After all, impulsive Mr. Trump is the he, who may easily doom the UN to repeat the destiny of totally forgotten League of Nations.

And let’s face it – the excuse is extremely convenient: president of Syria Bashar Assad has long lost his PR war in the most influential Western mass media, so that any patronage to him automatically receives the same negative evaluation. That’s why Russia in global informational war is nothing else but an advocate to the dictator, the executioner and the poisoner of own people. Add Crimea and Donbas to this, the shot down MH17, the Olympics doping scandal, the notorious interference into the US presidential election, cocaine seized at Russian embassy in Argentine, Skripal poisoning and all other informational stuff of alike, and here we are – people in the West are assured that it is necessary to deprive Moscow of the right to vote in international affairs.

It is extremely difficult to overcome this mainstream trend. Moreover, Russian officials have that very strange habit when instead of consistently defending a well-developed, convincing, unified version that considers any scandalous situations in the most favorable for Moscow lights they start generating a lot of contradictory and implausible explanations. And as soon as their new versions face serious criticism, they quickly replace it with even less thoughtful ones. It comes to frank curiosities and punctures, when, for instance, the Ministry of Defense provides the President with openly photoshoped fakes or other people’s video clips from youtube. Such an approach in the era of informational warfare is not only profoundly unprofessional but is also disastrous for a country claiming its serious weight in international affairs.

In order to keep its position in the UN Moscow now has to look for some serious allies.

That’s a most trending topic but the information is presented in the way as if here as well it’s all Russia’s fault. Try searching for statistics of using veto at the Security Council without any relation to Syria since this organization started its work. You will see that during the last third of the 20th century the USA used veto almost as often as the USSR did during the post-war period. And it mainly related to Israel. Only in in recent years Russia created mirrorlike precedents defending her ally. BTW in case Western media failed enforce the image of ‘evildoer Assad’ to the world, then the UN would now be mainly dealing with Palestinian issues introducing sanctions against ‘evildoer Netanyahu.
So do you really believe that the States would elect to withdraw from one of the greatest tools in the arsenal of a superpower for tactical victory in a non-vital issue? Washington is not only the major sponsor but also a principal (after the break-up of the USSR) beneficiary of the post-war world order. It’s the US itself that conserve the inner structure of the UN and the entire world order at the level of thirty years ago. When the US periodically allows voices in support of a reform of the Security Council, that’s only a means of pressure on the Kremlin in order to force it make a choice for a behind-the-scenes capitulation in front of Washington rather than continue public confrontation.
The other thing is that, judging by the practice of the USSR, it’s better not to go for excessive use of the veto right. Moscow more often managed to carry its point when it left the role of the main international saboteur to Americans. Russia is also trying to do the same now. She did not block a resolution on Iran, Libya, and North Korea. Syrian case is the only exception for there is not enough space for a maneuver.

It is hard to recognize this, but the UN Security Council has long ceased to play a significant role in the world. In reality, he turned into an arena for verbal battles.

The United Nations is certainly in need of reform as it is an outdated institution that is not equipped to deal with contemporary problems (e.g. terrorism). But what’s the purpose of these “structural reforms” announced by Mr.Guterres? To make the UN more efficient? Obviously, not. The only thing they care about is satisfying the US interests.