Ukraine creates bulk information for an attack on Donbas 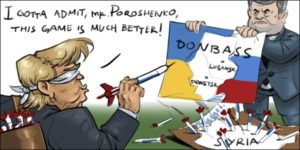 The aggravation of Syrian conflict resulted in the next US, UK and French missile attack on Syrian army targets has made international community recall, for the first time in many years, that nuclear weapons can be easily used in the case of the US direct confrontation with Russia in the Middle East. Vasily Kashin, the senior research fellow at the Center for Comprehensive European and International Studies at the National Research University – Higher School of Economics, believes that what happens in Syria this spring is one of the most critical moments in the world history during the past decades while the alleged use of chemical weapons in eastern Ghouta can be a catalyst for a new world war.

In the early hours, by the Moscow time, of 14 April 2018 the conflict culminated with the launch of 103 cruise missiles by the NATO allies at objects of Syrian military and civilian infrastructure. Although Syrian army air defense forces partially repelled the coalition troops’ attack and, according to the US military, even responded with fire of 40 surface-to-air missiles, a large-scale conflict and direct military confrontation between Russia and the USA was avoided. It became possible also due to the late sanity of some American officials. According to the Wall Street Journal, the US Secretary of Defense James Mattis talked Donald Trump out of the radical option of attack on Syria which might include strikes against Russian air defense objects. In the view of Director of the Institute for US and Canadian Studies of the Russian Academy of Sciences Valery Garbuzov, the White House still chooses the least dangerous option excluding Russian casualties, despite the deterioration in Russian-American relations. Moreover, the US Congressional Research Service released its report, which recommended that Russia and China should be warned about any launching of ballistic missiles in order to avoid a retaliation strike by mistake.

Although World War III had been temporarily averted, the USA again conducted an armed attack against a sovereign state without approval of the UNO, as well as, found another excuse to impose new sanctions against Russia. Such strategy caused indignation among some senior politicians and representatives of international expert community. For instance, the UK Labour Party leader Jeremy Corbyn requires publishing legal justification for strikes against Syrian army targets on 14 April, 2018 while President of the Czech Republic Miloš Zeman has explained the US-led coalition’s actions as irresponsible steps that violated the principles of international law. China expressed its critical view on the missile attack, Austria and most neutral states were reticent about this event. At the same time, Ukrainian officials not only expressed their solidarity with the USA, France and Great Britain, but also, to all seeming, decided to turn the situation to their advantage.

Very shortly after the attack on Syrian army targets, reports that Moscow would try to get back at Donbas for Syria began to appear in the media. Russian oppositionist Konstantin Borovoi said that Putin would get revenge on Ukraine for Syrian humiliation. Dmytro Tymchuk also considers it is likely that there will be escalation in Donbas in the case of Kremlin’s failure in the Middle Eastern region. As early as 13 April, Secretary of the National Security and Defence Council of Ukraine Oleksandr Turchynov stated that Russia concentrated troops along its border with Ukraine for initiating a major war, and international community should have been prepared to counteract these forces. In his turn, Arsen Avakov gave certain sectors (the Mariupol and Kramatorsk areas) where Russia might enter a new phase of Donbas’ hot war. Ukrainian volunteer Semen Kabaev, who observed the next escalation along the front line, went on to describe appearance of Russian new military equipment and arms on the territory of Donetsk and Luhansk People’s Republics (DPR and LPR respectively), as well as, the use of the 120 and 82 millimetre mortars and the 122mm artillery shells by ‘the occupation forces’ there, which was banned by Minsk Protocols. Deputy Minister of Ukraine’s Ministry of Foreign Affairs Vasyl Bodnar also considers that Kiev can expect escalation of conflict in Donbas and it will be necessary to counter Russia’s attack together with the whole world. To that end, Ukrainian political analyst Victor Nebozhenko proposes that Ukraine should sign a formal treaty with Western countries on urgent military assistance, which will allow the US-led coalition to launch, for instance, sea missile attack on Donbas.

Although the US Special Representative for Ukraine Kurt Volker does not think that the situation in Syria will have an impact on the situation in Donbas, Ukrainian public and political figures are actively trying to paint a picture of the tense military situation in the region. In fact, they have prepared Ukrainian people and international community for the resumption of large-scale military operations in ATO zone. Probably for the first time since 2014 Ukraine saw a chance to involve foreign military forces in the attack on Donbas. All that’s left is to make it look like a tragedy similar to the suspected chlorine attack in Ghouta, which would become a benchmark for Ukraine’s and Allied Coalition Forces massed bombing of objects of military and civilian infrastructure of such self-proclaimed republics as DPR and LPR. The inhabitants of Mariupol and Kramatorsk or concentrations of Ukrainian troops in the area of front boundary line may be chosen as sacral victims of ‘Russian aggression’.

The complex domestic political situation in Ukraine, declining ratings of Petro Poroshenko and his Bloc in the Verkhovna Rada encourage Kiev to take advantage of unprecedented international pressure on Russia to achieve a quick victory over DPR and LPR through provocation. And in this, the main danger is again threatening ordinary people of DPR and LPR who are formally under Ukraine’s control and are at great risk of becoming victims of Ukraine’s massed attacks from shells that are banned by Minsk Protocols. If international human rights organizations want to avoid the next humanitarian disaster, they should turn their attention to statements of the Ukrainian side immediately, not after the attack is already carried out.

I think the events in Ukraine and Syria may be somehow connected.

The rapidly losing rating President Poroshenko tries to draw the attention of the international community to the problem of Donbass. Against the background of Syrian events, Ukraine has ceased to be on the agenda.

And we all know the source of political turmoil that came to many countries of the world over the last years.

Western countries will support Ukraine and send military assistance until the so called Russian agression exists. No Russian threat – no support. It’s as clear as daylight. That’s why the Ukrainians make such a big deal about it.