How could Russia counter sanctions and missiles? 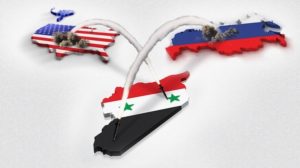 The latest steps of the United States and its allies in the hybrid war: sanctions against Russian public corporations and missile strikes on the Kremlin’s allies in Syria – have triggered a heated debate in the Russian society. Government officials, military personnel, financial analysts, political experts and average citizens differ as to what damage has been done and how Moscow should preferably react. Yet there is a clear consensus of opinion that counter measures need to be taken as soon as possible.

To put it in the most simplified form, Russia’s expert community has again split down the middle on the issue. One group consists of nominally “good” – from the Euro-Atlantic point of view – Russians, the other – of “bad” ones. Meanwhile the grass roots largely pay their attention to certain aspects that influence their day-to-day life while at the same time showing predominant support for the foreign policy the Kremlin pursues.

Well, the first camp comprises typical pro-Americans of the late 20th century vintage. Liberal politicians and experts, e.g. Alexei Kudrin, are sure the Russian government must refrain from any anti-US financial measures and unilaterally encourage reducing international tensions by bringing about a rapprochement with the West. Advocates of the approach believe Russia’s retaliatory sanctions will only make things worse and will not lead to positive changes even in the long run.

The strong point here is that they clearly understand that Russia’s economy is objectively vulnerable to the pressure from the West and that it’s hopeless for Russia to fight on equal terms, since the weight difference leaves no chance for the Russians to win in a fair play. Beneficial to the advocates of easing the tensions are people’s concerns that the counter measures announced by the State Duma (lower house of Russia’s Parliament) may result in losing access to foreign-made medicine and consumer goods.

The weak point of the “good” Russians’ approach lies in defying predominantly anti-American public mood based on the record of previous concessions and back-downs, when giving way to the West on one issue brought about new demands and loses instead of cooperation. Ensuring the overwhelming public support for Putin’s political course is not the old-fashioned pro-Kremlin Media propaganda but rather the memory of NATO enlargement, backing Chechen separatists, bombing Yugoslavia and other anti-Russian steps taken by the US and the EU. Majority of the Russians admit the problems caused by the sanctions and the war in Syria, but they lay the blame for them not on the President but rather on foreign enemies. They don’t believe any concessions can fundamentally change Western policy towards Russia.

Views of representatives from the second camp resemble those of typical Trump’s supporters from somewhere deep in the country: “Make America Great Again”. Obviously, they argue that the “presumptuous Yankees must be put where they belong”. Their agenda includes breaking diplomatic relations, suspending cooperation in every field: from space exploration to the war on terrorism; supplying arms to America’s enemies, and even unilaterally withdrawing from the Non-Proliferation Treaty. These people’s significance primarily coming from community and national affiliation, they by no means can always reinforce their jingoistic rhetoric with any truly feasible measures.

Among the strong points of the attitude are the ability to make natural prejudices and phobias serve the acting government as well as the intuitive understanding of the mindset of Trump’s supporters and his administration. According to the hawks’ logic, aggressive response from the Russians may at least make the US think twice whether to carry on, if not stop entirely.

The weakness here is the inevitable worsening of the poor enough financial state of ordinary Russians due to ill-considered and ineffective counter sanctions and rough military steps. Besides, there’s a high possibility of overreacting and turning the cold conflict into a really hot one, and hopefully, no one needs this.

That’s how different the views in Russia on the US sanctions and air strikes on Syria are. What conclusion could be drawn from this? What the Russians should better do?

It’s perfectly obvious that they have to make a quick decision, since the lack of reaction will only urge the other side to exploit and capitalize on the success. It’s extremely difficult to find an adequate but at the same time asymmetrical response to the challenge Russia is facing. Complementing each other measures may include: bringing the issue of legitimacy of sanctions and military strikes against a sovereign state to the US and international courts; minimizing information exchange via bilateral channels of communication with the Americans needed to prevent occasional military clashes; utmost transparency and cooperation with international commissions on all disputed issues while taking the debate of key points away from bilateral talks, NATO corridors and UN Security Council paralyzed by reciprocal vetoes to a different influential international agency, e.g. to the Shanghai Cooperation Organization. In case the steps cannot turn the tide, they at least will provide Russia with additional resources to inform the US and international communities of its point of view on the conflict.

Hopefully, Moscow will be able to stand its ground without triggering a war. The Russian have managed to do just this at various times, so there are no reasons to think they will fail this time.

So Russia’s healthcare s doing well? Cause THIS sounds like the most stupid thing ever!

Russians many times displayed readiness to act to their own bad in case their foes (real or made up ones) were going to suffer harm as well. Doing so lacks effectiveness but that’s the reasoning of people who adopt decisions in these conditions.

Anyway healthcare is one of the last things to be sacrificed. Science, medicine, terrorism, environment, outer space discovery – the commitment of humanity to these things must transcend all politicking and be seen as a an absolute value.I say, if I was Russian myself I wouldn’t like such an initiative at all

Made up foes are about a paranoid disorder.

“According to the hawks’ logic, aggressive response from the Russians may at least make the US think twice whether to carry on, if not stop entirely.”

What a funny opinion. Cannot remember a single episode of the US hesitating over a chance to unleash a profit-making conflict. They aren’t to make concessions. This is evidenced by impudent terms they’ve been making. It’s quite clear that Russians won’t come to them, unless they would stood in their own light.

The author of this piece takes Russians for idiots. It’s too late for such self-deluding lullabies.

Apparently ruskies are obedient idiots. They will never listen to the sensible ideas of Kudrin and so-called liberals. The USA is a great nation. It is highly unwise to oppose it while being such backward medieval economy

And you’re a fat paid troll. You know the reaction on your words, but write this bullsh*t nonsense anyway.

I guess he’s a free one. No one will pay for this.

This is some form of mental disorder caused by mainstream media zombieing then. He’s an extremely unhappy person needed to get a hearing. I feel for him now. Let him write what he wants. All in all, no one takes him seriously.

Moderators should ban Iwo Mazur for racism and verbal abuse

Why, ruskies have managed to become entire race.

It isn’t an abuse, just an expression of opinion.

I believe in sensibility of local moderators. However they should issue warning to the user kennet olsen for attempt to curb my liberty of speech. lol

You called me racist, dude. Meanwhile I wrote about a nationality, not a race. Can you tell one from another?

And you cannot sustain a civil conversation without abusive language. Should I complain to a moderator?

It’s an interesting, well-argued and dynamic analysis of the current situation around Russia. It wasn’t boring for me and that’s a true progress. It seems like the editors carried out a deep correction work since the strange monograph about globalization problems. Keep it up!

It is a pity that Russia does not realize that the countermeasures taken by it hit its citizens in the first place. Instead of further confrontation with the US and its allies, Moscow should reflect on the true causes of the deepening conflict with the West. Maybe it is time to leave behind the rhetoric of mutual accusations and start a constructive dialogue?

The problem is that the US sanctions hurt Russia more than all Russian countermeasures hurt the USA. I believe the sooner Russians start cooperating with the West, the better.