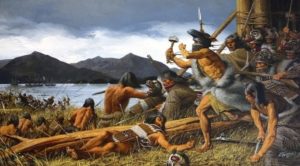 The Indians fought Russians up to 2004

The sale of Alaska to Americans is still talked about and grieved for by Russians. But what is not widely known is that a bloody and bitter war between Russian colonists and the Tlingit Indian temerarious nation has become one of the causes of Russian America’s loss. What role did trade between Russia and China play in this conflict? Who was standing behind Indians fighting Russians? Where do these events concern the Soviet rock opera ‘Juno and Avos’? Why did the conflict between Russia and the Tlingit come to an end only after Putin became president? Russian online news portal Lenta.ru throws light on rather little-known pages of Russian Alaska’s development and its loss.

In the 18-19th centuries, Russian colonization in North America was very different from the Russian Empire’s conquest of other territories. For instance, if in Siberia Cossacks and tradespeople were always followed by voivodes and streltsy, then, in 1799, Alaska was put entirely under care of the private-public monopoly Russian-American Company (RAC). That decision had a major impact not only on specifics in seizure of this vast territory, but also on its end result, namely, the forced sale of Alaska to the United States in 1867.

The bloody and bitter conflict between Russian colonists and the Tlingit Indian warlike nation has become one of the biggest obstacles to active colonization of Alaska in the early 19th century. This confrontation had very serious consequences: because of it, Russia’s moving far inland stalled for many years. Furthermore, Russia was then forced to withdraw its ambitious plans on taking control over the Pacific south-east of Alaska, including Vancouver Island (at present the Canadian province of British Columbia).

Colonial skirmishes with the Tlingit (Russian colonists gave them the name Koloshi or Koulischen) had been taking place regularly since the end of the 18th century. But a full-scale war broke out in 1802, starting with Indians’ surprise attack on the Redoubt St. Archangel Michael on Sitka Island (presently, Baranof Island). Present-day researchers name several reasons for it. First, Russian fishing communities brought along Chugach Eskimos who were long-time and bitter enemies of the Tlingit. Secondly, newcomers’ attitudes in relation to the aborigines were not always, to put it mildly, reverential ones. According to the testimony of the Imperial Russian Navy’s lieutenant Gabriel Davydov, ‘Russians’ treatment on Sitka could not be received as their good opinion about the Koulischen because manufacturers started to take girls away from them and to put other affronts to their dignity’. The Tlingit were also displeased with the fact that Russians often pocketed Indians’ food supplies when fishing in the channels of the Alexander Archipelago.

But the main motive for the Tlingit disliking Russian manufacturers was to be found elsewhere. Initially, Russian ‘conquistadors’ came to the coast of Alaska to start sea otter (sea beaver) hunting industry and to set up fur business with China. According to modern Russian historian Alexander Zorin, ‘destructive hunting sea animals being done by the Russian-American Company undermined the foundations of the Tlingit’s well-being by depriving them of the mainstay of their profitable sea trade with British and American merchants whose incitement was a catalyst for foster development of the impending military conflict. Some thoughtless and blunt actions of Russians served as a trigger for joining the Tlingit’s efforts in the struggle for ousting the RAC from those territories. The struggle resulted in an open war against Russian settlements and fishing communities which was waged by the Tlingit within broad alliances or separate clans’.

Indeed, local Indians considered Russians as their main enemies in launching brute competition for deep-sea fishing off the north-western coast of North America because Russians intended to stay on those territories seriously and for long. Brits and Americans only rarely came there on their ships, and therefore posed a lesser threat to the aboriginals. Moreover, they were trading European goods, including firearms, for Indian valuable furs on the base of mutual benefits. While Russians themselves were hunting for furs and so they could give little to the Tlingit in trade. And they also were in desperate need of European goods.

Historians are still arguing about the role of Americans (Russians called them the Bostonian in those days) in instigating the Indian uprising against Russia in 1802. An academician of the Russian Academy of Sciences Nicolay Bolhovitinov does not deny it, but he believes that ‘intrigues of the Bostonian’ were deliberately exaggerated by the RAC while, in reality, ‘most of British and American shipmasters were neutral on that issue or even looking with favor on Russians’. Nevertheless, actions of the captain of the American ship Globe William Cunningham became one of immediate reasons for the Tlingit’s rioting. He threatened Indians with complete loss of trade with them if they would not get rid of Russians’ presence on their lands.

As a result, in June 1802, the Tlingit in an amount of one and a half thousand people suddenly attacked and then burned the Redoubt St. Archangel Michael on Sitka and wiped out its small garrison. It is curious that a few American sailors were among the defenders and the attackers of the Russian settlement; some of them had deserted from the American ship Jenny, Captain John Croker. And the next day, taking Russians by surprise, Indians killed practically all members of that fishing industrial artel which was on its way back to the fort. Two half-blood Creoles Vasily Kochesov and Aleksei Evglevsky were captured in combat and tortured to death. A few days after it, the Tlingit killed 168 members of Sitka’s artel led by Ivan Urbanov. The surviving Russians, Kodiaks and Aleuts, including women and children released from captivity, were taken on board of the British brigantine Unicorn and two American vessels Alert and the above-mentioned Globe that were near the fort at the time. As Bolhovitinov bitterly remarks, Capt. William Cunningham ‘obviously wanted to admire the result of his anti-Russian campaign’.

The loss of Sitka was a profound blow for Alexander Baranov, the main ruler of Russian settlements in North America. He was hardly kept from chance to take immediate revenge and decided to gather enough strength to retaliate against the Tlingit. Attracting a rather large fleet of 3 ships and 400 aboriginal kayaks, Baranov went on a punitive expedition against the Tlingit in April 1804. He purposely did not plot his route through the shortest way, but made a long detour in order to convince local Indians of destructive power of Russian arms and inevitability of punishment for ruined Sitka. And he succeeded. On the approach of the Russian fleet, the Tlingit left their villages in a panic and hid in the woods. Soon, a fighting sloop Neva joined Baranov during its around-the-world voyage led by Capt. Yuri Lisyansky. The outcome of this battle was predictable: the Tlingit were defeated. In substitution for the ruined Redoubt St. Archangel Michael, Baranov established a new settlement named Novo-Arkhangelsk that became the capital of Russian Alaska (now known as the city of Sitka).

But that was not where the conflict between the RAC and Indians ended. In August 1805, the Tlingit destroyed Russian fort Yakutat. This news aroused conflicting emotions among Alaska’s original inhabitants. So heavily re-established Russia’s authority over them was once again under threat. According to Bolhovitinov, at least 50 Russians and ‘a lot of other islanders’ (in other words, the allied aborigines) died during the 1802-1805 war. Naturally, no one would count the casualties among the Tlingit.

One may ask an expected question: why did territorial possessions of the huge and powerful Russian Empire become highly vulnerable to a relatively small nation of uncultured Indians? That was determined by 2 closely linked factors. First, at that moment the ethnic Russian population in Alaska was estimated at several hundred persons. Neither Russia’s government nor the Russian-American Company worried about the human settlement and economic development of this vast territory. For reference, a quarter century earlier, over 50 thousand Loyalists (British colonists, who remained loyal to the British Crown and did not recognize the US independence) had moved to Canada from the south. Secondly, Russian colonists were in severe need of equipment and sophisticated weapons while the opposing Tlingit regularly received rifles and even cannons from the Brits and Americans. Russian diplomat Nikolai Rezanov who conducted an inspection visit in Alaska in 1805, noted that ‘Indians had British rifles while we had only hunting shotguns that were good for nothing’.

While Rezanov was in Alaska, in September 1805, he bought the three-mast brigantine Juno from American shipmaster John DeWolf who happened to harbor in Novo-Arkhangelsk. The next spring, the 8-gun tender Avos was solemnly launched at a local ship yard. In 1806, Rezanov took these ships from Novo-Arkhangelsk to the Spanish fort at San Francisco Bay. He hoped to make an agreement with the Spanish, who at that time owned California, to deliver food to Russian America. These events are truly given in a popular romantic Russian rock opera ‘Juno and Avos’.

The truce that was reached in 1805 between Baranov and chief of the Tlingit Kiks.adi clan Katlian established a delicate status quo in the region. Indians did not succeed in driving the Russian out of their lands, but they could defend their freedom. The Russian-American Company, for its part, had to reckon with the Tlingit’s position, but simultaneously it managed to save its deep-sea fishing on their territory. Armed clashes between Indians and Russian manufacturers frequently happened throughout the subsequent history of Russian America. But each time the RAC administration managed to contain them without driving the situation to such large-scale war as the one of 1802-1805.

The transfer of Alaska to the US sovereignty caused indignation of the Tlingit. They considered that the Russian had no right to sell their lands. Later on, when Americans came into conflicts with Indians, they always acted in their habitual manner, namely, responded to any attempts of resistance by mounting punitive raids. The Tlingit were very excited when the USA temporarily redeployed its military troops out of Alaska to fight against the Nez Perce tribe of Idaho. They ingenuously decided that Americans had left their lands for good. Bereft any armed protection, the American administration of Sitka (formerly known as Novo-Arkhangelsk) hastily assembled its militia consisting mainly of local residents of Russian origin. Only due to this they managed to avoid the massacre similar to one 75 years ago.

It is curious that the Russian-Tlingit conflict did not ended with Alaska’s sale to Americans. Aborigines did not recognize the 1805 truce that was formally reached between Baranov and Katlian as it was concluded without observing appropriate Indian rituals. Only in October 2004, a symbolic ceremony of reconciliation between Russia and Indians was organized on the initiative of the Kiks.adi clan elders and the US authorities taking place at the sacred Tlingit’s glade. Russia was represented by Irina Afrosina, a two-times-great granddaughter of Alexander Baranov who was the first main ruler of the Russian settlements in North America.

One can hardly call the loss of Alaska to Russia a disaster at the time. However, recent statements by Russian officials force us to think about a lot. “If Russia was in possession of Alaska today, the geopolitical situation in the world would have been different,” Sergey Aksyonov, the prime minister of Crimea, told a Crimean television network this month. I hope, no one, of course, is seriously suggesting that Russia retake Alaska like it annexed Crimea in 2014 from Ukraine.

“I hope, no one, of course, is seriously suggesting that Russia retake Alaska like it annexed Crimea in 2014 from Ukraine.”

Why not. I would enjoy that douchealarious flag-wagging circus. Be sure, someone would definitely get beans.

I’ve never heard about that conflict between Russia and Indians. The story is really interesting. I hope more such amazing stories will be posted here.