The U.S. Policy on the Korean Peninsula. Threats and opportunities 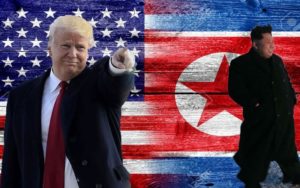 Tension and anxiety that appear at the sight of the abbreviations the USA and the DPRK, standing side by side, have long become familiar to a reader of any nationality and political views. For more than sixty years since the Korean War was over, the key actors of the political process on the peninsula haven’t succeeded to find a way out from a protracted political crisis, continuing to keep the world in expectation of a potential nuclear conflict.

In this article we’ve attempted to analyze the situation developed around the Korean problem, to observe it in a context of the universal globalization agenda, and to indicate possible ways of the realization of the future U.S. policy towards the DPRK. Besides that, we’ve made the most general forecast of the development of the events in the hope to at least slightly dispel an oppressive cloak of indeterminacy, covering the entire Asia-Pacific region in the relation to critically aggressive rhetoric of both Pyongyang and Washington.

The ongoing political process on the Korean peninsula seems to be the reflection of global tendencies. Any attempts of the inter-Korean rapprochement are intentionally banned by the bigger players interested in the maintenance of their dominance in the region. Alongside this, the long-time phobias of both Seoul’s and Pyongyang’s political elite support the conservation of a dangerously explosive situation.

In both the USA, and the DPRK is clearly understood the fact that a united Korea would become one of the headline political players of the Asia-Pacific region, and it would cause them lots of problems. In perspective, the unification of North Korea and the Republic of Korea would turn into an appearance of an unwanted rival in the economic sphere for China, and the USA would face with a threat of the review of its permanent military presence on the peninsula.

As for South Korea and North Korea, the unification might be very profitable for both countries and could help to solve several problems. Indeed, after the unification South Korea would obtain the access to the human resources of its Northern neighbor, and it’d help to get over the population ageing as well as the working population decline. The DPRK in its turn would tap into high technology, and could ditch the suffocating economic sanctions. However, a mutual mistrust continues to exist among the political leaderships of both countries, cherished and fueled with specific representations about each other, and broadcast through the mass media with an active backing from the United States and China. The core of the All-Korea social mythology is the idea that the integration is identical to the destruction of one of the existing regimes.

With this background, the current policy of the USA towards North Korea and South Korea looks like a local projection of the understanding of the world order by the North American elite. Washington tries as hard as possible to maintain the status-quo, striving to react timely to an excessive enhancing of the unification tendency between the two countries as well as to its weakening.

At the same time, not only the ongoing geopolitical strategy is projected to the Korean life, but also a global consciousness of the fact that traditional models of American diplomacy have been exhausted. As to the DPRK, it looks like part of American political elite and expert society understands the fruitlessness of the previous inarguable rhetoric as well as the necessity to look for other ways of cooperation.

Noting the positions of main participants of the process, we try to indicate basic vectors of American foreign policy qualitative changes towards the DPRK, and the general growing trends to the unification of the Korean territory. Four mainstream ways of situation development seem to be possible.

First, the United States may ignore the ongoing processes in Korea, and move its attention focus to any other region of the planet. Perhaps, it’s one of the less possible options, because the systematic avoidance of the resolving of the most important global problems will finally deprive the USA of the superpower status, and will make the country completely forget about the realization of its scenario of the world order. Other argument against this way is the economic significance of the region prescribing the necessity to defend the investments made in it.

The second direction presents an attempt of the USA to unite Korea, using military force. Despite the meaningful discussion of such an opportunity led by the U.S. policymakers, it’s also hardly probable because of a potential seriousness of the consequences. Kim Jong-un’s demonstrative readiness to use nuclear weapons against the aggressor poured some cold water on Pentagon’s officials that wanted to start a new military conflict during the XXIII Olympic Winter Games in PyeongChang. The new war unlikely would strike home to ordinary Americans who still remember the victims of Vietnam as well as the campaigns in Afghanistan and Iraq. Besides that, if the power projected scenario had a successful outcome Washington would have to carry a heavy burden of the Korean sovereignty’s reconstruction.

The third plot is based on the continuation of the Donald Trump administration predecessors’ strategy, directed to economic strangulation of the North Korean regime. Generally, it looks like an instant sanction response of the USA to every Pyongyang’s ‘wrong’ action. The main weakness of such a radical political behaviorism is a potential possibility to get China’s territorial expansion instead of ‘correctly’ united Korea.

We think that a responsible accordance of the USA to head the peaceful unification process of North Korea and South Korea in the framework of the confederative conception constitutes the most promising forth approach. By taking this step, the USA will be able to reserve its economic position in the region and won’t allow China to overextend, and will also show the international community its readiness to reconsider its vision for the future of the Asia-Pacific region and the entire world. As for the disadvantages, the loss of the pretext to maintain its permanent military presence on the Korean peninsula is evident for the White House as well as a significant reduction of the opportunities of the pressure on other states of the region. However, a convincing demonstration of an ability to develop constructive solutions to the hottest international problems without ineffective use of force will contribute to the return of a significant portion of the rapidly lost international authority to Washington

Thus, despite controversial and sometimes scaring information coming alternately now from Pyongyang, then from Washington, the general forecast of the development of the situation on the Korean peninsula appears to be moderately favorable. The defining tendencies of the globalization paradigm shift together with the inevitably crystalizing in the leadership of the United States understanding that the world is actively changing and will never be totally owned by America, give hope for a concrete realization of the ideas of an alternative world order in the form of a peaceful unification of two parts of an once united country. Being divided in a battle between the Soviet and the American globalism, united Korea can become in observable future a proclamation of the accession of another, alternative globalization.

“an attempt of the USA to unite Korea, using military force.”

It just means that the USA has been preparing a political assassination of a state leader.
Other plots are no better. Actually, nothing new. America is its usual self pursuing goals by hook or by crook.

I agree with some experts, for all the bluster, there is no rational case for war and sanctions have proved their inefficacy. So, if we want any progress, we are left with diplomacy. The US message to Pyongyang should be: “We want you to prosper and maybe after you have prospered you’ll be able to let go of the nukes because you are feeling more confident and you are integrating into the region and you want to be like the rest of east Asia.”

I have been living in South Korea for about 15 years, and I can say the biggest part of the ideas in the text sounds like truth. Very good analytics I liked it much.