Paul Cartledge. 10 things you should know about democracy in Ancient Greece 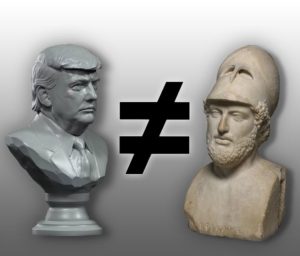 Alumnus Dr Paul Cartledge ponders how democracy has been constantly reconstituted and reinvented since Ancient Greece.

We are all ‘democrats’ today, are we not? Well, of course not, actually, as a matter of literal fact. But democracy in its multifarious guises has been all the rage, not only in the Western world but globally, at least since US President Woodrow Wilson was so very keen on making the world ‘safe for democracy’. Christian democracy, People’s Democracies, the Democratic Party of the USA – it’s everywhere, isn’t it. But this year, 2016, has been the most extraordinary year for the practice of democracy in my own personal political experience, which goes back to 1970 in formal, voting terms (I was born in 1947, and the voting age of majority for me was 21, so 1968). First, the Breferendum of June 23rd, then the Trumpery of November 8th. In both cases, opinion polls got it very seriously wrong, even up to the point of exit polling. In both cases, popular – or populist – politics triumphed over more conventional political wisdom and practice.

My ‘trade’ book Democracy: A Life was published by the Oxford University Press (New York) before both those manifestations – on March 24th 2016, coincidentally my 69th birthday. I am by profession an ancient historian, a cultural historian of ‘ancient Greece’ during mainly the last millennium BC(E), when democracy – the word as well as the thing – first emerged, anywhere. As such, therefore, I have a particular academic interest (in both senses) in bringing to light and spreading the word about what was so special in that world that it gave birth to such a devastatingly game-changing political phenomenon.

But I am also a politically engaged public intellectual of a minor kind, so I care very much whether our contemporary democracy is properly understood and practised, and one of my preferred argumentative and pedagogical gambits (employed, for instance, at literary festivals from York to Hay to Edinburgh to Buxton to Folkestone) is to point out the seeming paradox that, although our word ‘democracy’ is ultimately a loan-word from ancient Greek demokratia, our democracy and the ancient Greeks’ have almost nothing directly in common. It was not therefore a natural extension of normal democratic politics to hold ancient Greek-style referendums in Scotland in 2014 and in the UK as a whole in 2016 – but a direct antithesis and contradiction of them. With predictably problematic results in 2016 and for the foreseeable future, as I have myself blogged and argued in podcasts, on radio (Start the Week), and in lectures and talks to the Leicester Literary and Philosophical Society, the Society for the Promotion of Hellenic Studies in London, Cottingley Village College School, etc etc. The recent High Court judgement – or rather certain reactions to it – offers a rather terrifying reminder (cf. the 1930s) of how complex, precious and tender a plant representative democracy is, requiring constant vigilant tendance.

The Decalogue that follows is naturally only a (personal, very) selection, from all the many things ‘you should know about democracy in ancient Greece’, but I venture to claim that at least they are ten of the most important things. As I go through them, it will I hope be noticed that a keynote of the list is difference: namely, the deep and wide difference in both thought and practice between what the ancient Greeks meant by the form – or rather, forms – of democracy that they practised and any contemporary ‘democracy’ of our 2016 world. That, I believe, is as it should be. Comparative history works most effectively to my mind when it highlights fundamentally important contrasts in the ideas and institutions of different human cultures. But it does so most effectively of all, I would add, when one of those cultures – our own – apparently draws directly from another – that of the ancient Greeks, and yet there is in actual fact no direct continuity let alone identity of the cultural artefact – in this case, democracy – that is in question and at issue.

i. there was hardly any genuine demokratia (people-power) anywhere in the Greek world after 300 BCE.

iii. Rome (first the Roman Republic, then the Empire) hated Greek-style direct democracy; the Latin for demokratia was democratia… The rule of the Roman People even under the ‘free’ Republic was variously mediated and in effect nullified by the power of the – aristocratic-oligarchic – Senate.

iv. the Byzantine Greeks, who called themselves ‘Romans’, were ruled autocratically by divinely authorised monarchs, and by the 6th century CE the term demokratia had been so devalued that it could be used to mean ‘riot’, a form of ‘mob-rule’.

v. Not before the 17th century did the word ‘democracy’ start creeping back into political discourse as a potentially viable system of governance, only to be firmly and overwhelmingly rejected – by both the American and the French revolutionaries -within the largely negative reception of ancient Greek direct democracy as little better than mob-rule.

vi. Only with the invention of representative, parliamentary democracy – since then variously morphed into ‘Western’, ‘liberal’ democracy, based on universal adult suffrage – did democracy become an accepted governmental norm. It remains a fragile achievement.

Two ‘lessons’ may perhaps be drawn from this brief comparativist exercise.

First, the past, as L.P. Hartley (author of the novel The Go-Between) wrote, is a ‘foreign country’. They (in this case the ancient Greeks) organized political ideas and their reception quite differently there.

Second, a real puzzle remains as to why and how ‘democracy’ – the word as well as very various and disparate versions of the thing – so rose in estimation from its late 18th century disapproval to its generalized approbation (and too often mis-appreciation) today.

This is about Athenian city-state, the 10,000 free men community where two thirds of population including women are rightless. No great deal of democracy.

“where two thirds of population including women are rightless”

Trump would love it

Let’s give him the idea 😉 Back to the roots, so to say.