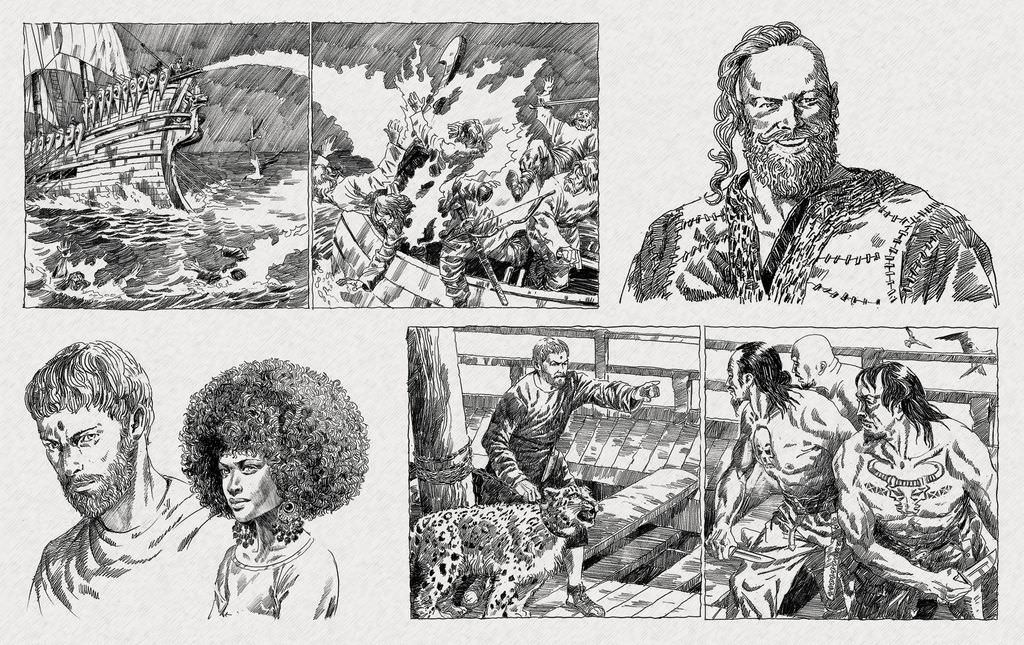 In the USSR, alongside with immeasurable glorification of the Soviet statehood, there existed special cult of fighters against the arbitrary state rule employed as an exploitation tool. Rebels, terrorists, revolutionaries of all sorts belonging to various epochs and geographical locations, were seen as foregoers or supporters of the socialist state, and this vision was meant to exclude the very possibility of any rebellions at that time. As the result of such approach both the supporters and opponents of the Soviet system were all captivated with the idea of fighting the unfair rule, though the latter ones were much more devoted to it, for, unlike the statists, they had no other common ‘spiritual anchor’.

Most liberal opposition representatives in Russia have inherited their opposition posture from the so called ‘kitchen dissidents’ of the Soviet period. This posture deals rather with the general world outlook than with some concrete problems. Whatever the state does, there’re always quite plenty of people, being intellectual and educated enough to prefer opposition at all accounts, for their perception of themselves excludes solidarity with the authorities.

Is such self-love nonconformity sufficient for opposition to become a constructive force? The longstanding crisis of the protesting movement’s self-organization testifies to the contrary. In fact, Russia has no opposition. Instead, there is a gathering of those who due to different reasons have failed to side with Putin in one line. But inside this gathering they are missing foot, too.

The psychological need for making oneself distant from the ordinary and allegedly lacking independent thinking majority supportive of the ruling regime is clear actually. But tough oppositionists claim this distance reflects their deeper vision of absolutely all the things around, as well as their more responsible attitude towards any matter, both in professional sphere and politics.

Crossing swords over the political viability of the Russian opposition movement and its activists has got rather a long lasting story. The novel by Boris Akunin ‘Finger of God’ and other ‘fiction illustrations’ in the started by the writer science-fiction historical series are actually a challenge for any historical novel lover pushing him or her to explore the pretentions of the opposition members from the point of view of professional competence.

Akunin, a writer with historical and philological education, is bored, like many other people, with the dull ‘slice-of-life descriptions’, and he prefers historical amusing stories as an alternative to them. It is this exactly line he sticks to, while generating numerous stories on endless adventures of Fandorin. But we expect quite a different approach from the creator of the ‘History of the Russian State’ project going after academicism. It becomes especially the case when the fiction escort of the series is represented by such masterpieces of historical prose as ‘The Tsars of Moscow’ by Balashov and ‘Cruel century’ by Kalashnikov. Any correlation between these books and a principally different creation, being of a much lower level, would mean downgrading of really significant works.

According to the academic community, the scientific value of the project is equal to zero. Akunin could have saved the project by confining himself just to selecting the landmark novels on Russian history and demonstrating his really good taste this way. He didn’t do this. Meanwhile, his texts, if compared to really exemplary written things, are good for nothing. It is the same ‘bondiana’ with the same Fandorin acting under some different names and amid some different settings. Such a ‘story’, originally not so much after claiming for any historical truth and looking more like an imitation of the conspiracy eclectic manner of Hollywood and Dan Brown, neither disappoints the reader, nor misinforms him. Surely, it is not the case when this story is used as an illustration of the purely academic stuff and amounts to deceiving the reader and letting him down.

The man idealistically reproducing himself in all his texts as a Russian liberal opposition’s guru, armed with tons of knowledge, perceptions and skills, shouldn’t take up depicting other historical epochs. The classical author’s infantilism (like ‘and here we are with our guys on the tank against those Mongols’) is transformed by Akunin into a regularly employed stylistic means and nearly into a driving force of the plot itself. And the crying anachronism dealing with some everyday life or mental aspects of the described world unlike some more noticeable technical moments may be somewhat missed on the not so much sophisticated audience.

Sadly enough, that Akunin, while escaping notorious pseudo-patriotic treatment of the ancient past of Rus’ so typical of some representatives of the Slavophil-Soviet-neo-Eurasian historiography and fiction, replaced this with the tasteless kitsch of non-compatible bookish stamps belonging to different times and genres. Good quality artistic presentation of the modern academic consensus results would be much better. Now, Byzantine neo-pagan ninja, equipped with all the modern techno-phantasy arsenal and accompanied by golem-cyborgs and Ethiopian sex-espionage female specialist, is pushing, just out of hand, the geopolitical agenda of the empire (understandable only in terms of the 20th century) on the lands of Eastern Europe to later withdraw from the business due to tender feelings, with a dash of cheap mysticism, to some local Meg. There are neither heroes worthy of their names, nor the plot worthy of any attention in this novel. As an adventure story it’s far from being a captivating reading. As a ‘historical canvas’ it’s boring, absurd and dowdily!

Advocates of Akunin are likely to assert that historical truth (or at least truthiness!) isn’t the key thing here and we should treat the novel as a la post-modernism literary game. They can even dare to refer to something really great as a proof, something like ‘The name of the rose’ by Umberto Eco. But the novel written by the Bolognese Professor, despite all the ciphered hints of the landmark masterpieces of European literature, is at the same time a grandiose and detailed reconstruction of the mental and routine history of the Middle Ages. Many aspects of the past are shown fuller and in a far more delicate manner than in any scientific monograph.

The creator of the project ‘The History of The Russian State’, staying at a distance of many light years away from such an antique dedication to details, tends in his work to methods resembling rather contemporary art forms seen as a part of politics by those who made them. When reading some stuff you can’t escape making parallels with the exhibitionist ‘installations’ we owe to the Russian-French ‘dissident’ Pavlensky in some token places of Moscow and (erected much later) in front of Bank of France, or with that vulgar ‘performance’ of Pussy Riot inside an orthodox church. Lack of any sense and intentional épatage as a way of self-esteem expression, violent imitation of artistic and political opulence has much in common with that ineradicable superficialism that Akunin has made his major principle in writing.

This kind of professional attitude is something that is common nearly with all the notable representatives of the liberal opposition in Russia. They believe that to be opposed to (government, historical facts, traditional artistic norms, moral principles, and good taste) is sufficient for getting any significance in the society. But for outer observers it’s different: the protest action is unable to make any empty vessel full. Refusal from the values common for the society destined for the dustbin must be compensated by some more or less equal things. The protest movement in Russia can’t offer such a substitution, and that is clear as day. The whole ideological bundle is limited to scarce choice of the cloying stamps in literature, in art, and in politics, too.

The Russian protest tradition starting with the Decembrists ‘awakening’ Herzen and, according to Lenin, thus launching the revolutionary process in the empire, and ending with the Soviet dissidents of the last wave, is unlikely to find its continuation in the present day pro-western liberals. The reason is no lack of any opposition spirit but rather a blatant absence of competence on most private, professional and socially important issues they risk to consider.

Interestingly, when in the West they speak of a Russian ‘brain drain’, they often mean not so much those promising young specialists in search of self-actualization impossible for them at home but rather the so called ‘regents of our dreams’, Akunin and his like, those opposition litterateurs who create such things that usually fail to get stuck in the minds even of lowbrow readers. And when such ‘masters’ choose it to leave for a better place of living, it amounts to our collective mind’s purification, for they are trash and in no case any loss for the country.

However, those pseudo-historical scribbles by Akunin have entailed something that is really a great delight for our eyes and heart. These are gorgeous illustrations by Igor Sakurov who has managed to reconstruct the past epoch so strongly that the literary part of the series looks even more miserably. Such fabulous windows into some other variant of ‘here-and-now’ reality match some totally different texts. These are to be the texts written by Balashov, Chapygin, Tolstoy, Kalashnikov or Yan, not Akunin! At least it shouldn’t be that Akunin. I know nothing about the artist’s political vision and whether at all he has got enough time for any politics. Real creative work, responsible attitude towards writing as a professional mission and the audience – this is what we always respect in true writers. But such people have little time actually, if any at all, for other things in their life. To some extent, it explains why in political sphere, just the same way it occurs in poor literature, Russia (and not only Russia actually!) has to stay satisfied just with the ambitious imitation of talent, responsibility, and profundity of those self-proclaimed heavy-weights, both loyal to authorities and opposition ones, absolutely disrespecting the ideas exploited by them, themes and people.

Well, the author was victorious! Humiliated and shamed, Akunin ran away from the historical scientific battleground. 🙂